Bob Birchard and I might be related--we're not sure how or how many years back, but probably a couple of hundred--times removed as well as years.
Bob is the president of the Society for Cinephiles/Cinecon, which presents the annual Cinecon Classic Film Festival. He also owns a vast archive of historic Hollywood images.
Bob's knowledge of film history is unsurpassed.
Please welcome today's guest author, Robert S. Birchard. 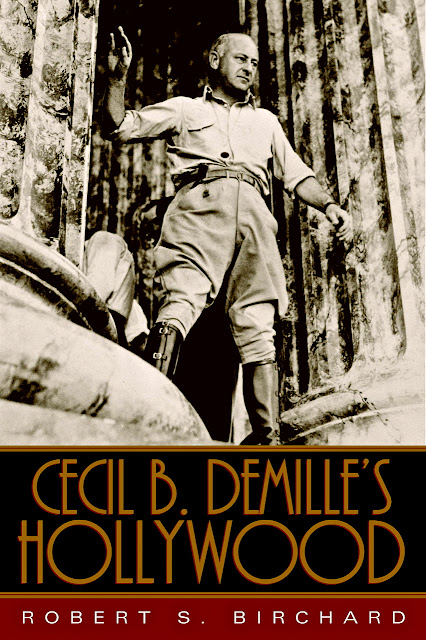 I was being driven to kindergarten when I first knew I wanted to become a reader. Peggy Phillips, she was seven, sat in the back seat reading out loud, showing off--and I wanted all the attention she was getting...

I was ten when I knew I wanted to write. Mrs. Zimmer handed us pictures clipped from old magazines and told us to compose stories using the pictures as a springboard for our imaginations. I can’t remember the first one I was assigned, but I asked for a second one to do on my own. There was an Indian on horseback, watching a train in the distance...

A year later I got interested in film when I saw the David Wolper NBC special, Hollywood: The Golden Years. I was hooked the second the host walked toward the camera and said: “Hi, I’m Gene Kelly, and I work in the movies . . . ” I thought to myself that I’d like to work in the movies, and discovered through clips from films like The Birth of a Nation (1915), Intolerance (1916), Ben-Hur (1925) and The King of Kings (1927) that silent films were much more than the chopped up slapstick comedies I’d seen on Howdy Doody Time and Lunch With Soupy Sales...

I first got published at eighteen when I sent a “most interesting character you’ve ever met” college essay about an old cowboy I knew to Frontier Times on a whim. I received a fast $20 for that literary effort, but it was a start.

UCLA film school, then peanut butter and crackers until my friend from Junior High, Bill Evans, helped me land as a temporary PR officer for the Los Angeles Community College District. Night projectionist at BBS Productions, and projectionist on the “Bel-Air Circuit” for Peter Bogdanovich, Helen Reddy, producer Mike Frankovich, and Barbra Streisand...

From BBS I landed at rbc films, non-theatrical distributors for the films of Charlie Chaplin, and through a series of “you can’t get there from here” circumstances I did work in the movies as a film editor. And all along the way I wrote...about the movies and the people that made them, and often about nearly forgotten films and filmmakers—over one hundred articles, and books that include Cecil B. DeMille’s Hollywood, King Cowboy: Tom Mix and the Movies, Silent-Era Filmmaking in Santa Barbara and Early Universal City.  (Bob's books on Amazon here, where they all get five stars, by the way.) 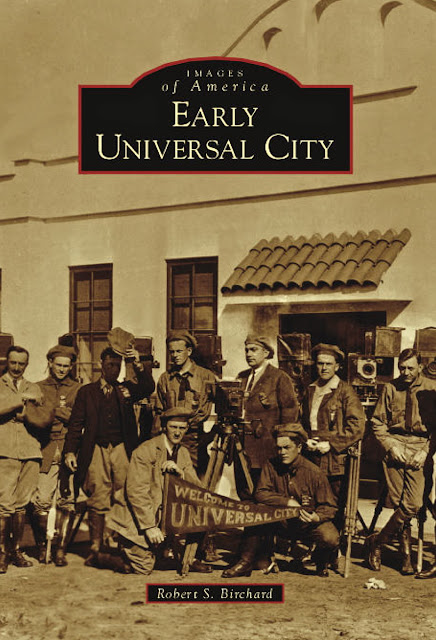 I even found a lost silent movie studio hiding in plain sight in Panorama City, but that is a story for another time...

(However, we do have pictures!) 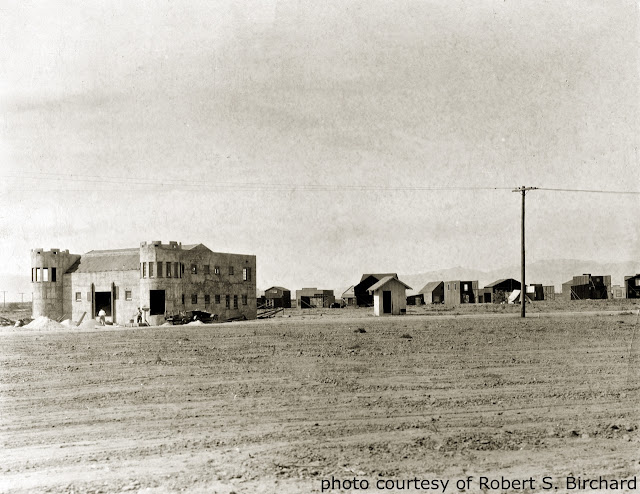 On July 22, 1925, nineteen trucks hauled lumber from the Builders Lumber Company in Vernon to Uneeda Acres in Van Nuys to begin construction on the Thomas C. Regan Studio. Van Nuys architect H.B. Pentland's design for the administration building, dark stage and dressing rooms was designed to give the studio a distinctive look and attract attention. 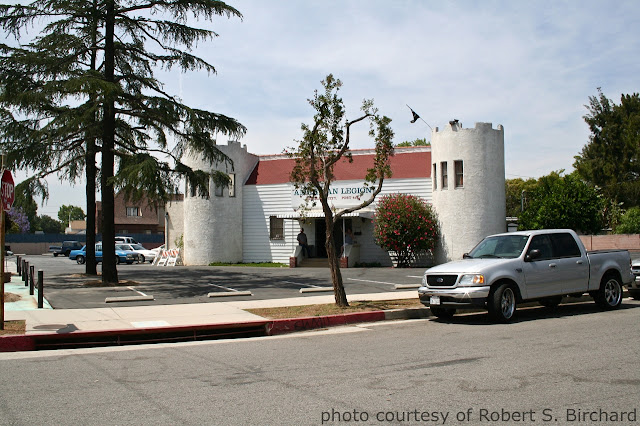 Regan Studio today
Although no commercially-released film ever came from the Thomas C. Regan studio, the distinctive "castle" administration building of this "lost" silent movie studio is still standing and looks very much as it did when it was completed in 1926. Today it is home to American Legion Post 817 of Panorama City.
Posted by Petrea Burchard at 12:01 AM

Hi Bob! Enjoyed this piece so much, I'm buying the book.

I got the Universal Studios book for a friend and she liked it so much I got it for myself.

Yes, aren't the photos great? You want to head over to Panorama City and find the place yourself.

Those books look very interesting Bob. That really was the "golden years" of film making and the Hollywood scene and all of the TV shows that were made there too. Great work Bob. Do you have any other books simmering?

Bob's always working on something. He contributes to anthologies and writes articles for film magazines, etc. Clicking on his name at the top of the post will take you to his website.

It's so great you knew what you wanted to do when you were 10, Bob. Thus began a rich journey. The books look wonderful.

A wonderful post. Thank you Robert (and Petrea). I love that era, it is so romantic (and chaotic). Luckily for me both books are also available on Amazon UK so I won't have to wait weeks for shipping (though if anyone else over here wants Early Universal City they'll have to wait as the Amazonians only had one remaining copy).
Petrea, your guest authors always hit the spot.

I'm not a film fanatic, but I enjoyed this book report by Robert Burchard.

Thanks for your comments, everyone. I hope Bob will have a chance to stop by today and say hello.

So interesting! Thanks for posting this :)

Thanks to all who took the time to read and comment. I really appreciate it . . . Take That, Peggy Phillips! ;-}

I so want the Universal Studios book. I always ask for a book from this series for my birthday, but the series is growing faster than I can age.

Okay Bob, Google says there are 468 people in the US named Peggy Phillips. http://tinyurl.com/3sf9vav
(I'm surprised there aren't more.) Are you going to tell us?

PB, he's probably referring to PP the world famous author. If I'm right I hope I win something.

Actually, the Peggy Phillips I refer to was my seven-year old-read-out-loud smartypants up the street neighbor mentioned in my guest blog. Haven't seen her since high school, and don't know if she still uses her maiden name.

Oh of course! Right there in the first paragraph.