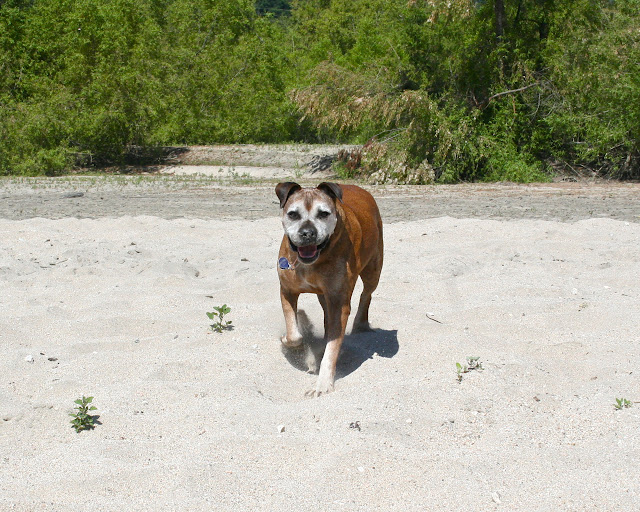 Today marks the 8th anniversary of the day John and I brought Boz home from the shelter. We think of it as his birthday. Which birthday, we're not sure. A good guess would be 12 or 13.

Like any old guy, Boz enjoys simple pleasures. He likes to warm himself on the scratchy grass in the back yard. His morning routine includes a nap in his sunny spot in the living room. In the afternoons he enjoys lounging on the front porch and keeping watch over the neighborhood. Of an evening, he derives great joy from sitting in the living room with his humans, chewing his bone and passing gas. In many ways, he's just like the rest of us.

He and John play dog/man games like "kill the squeaky" and "stalk the alpha." But nothing tops Boz's pleasure meter like running. He loves, loves, loves to run. 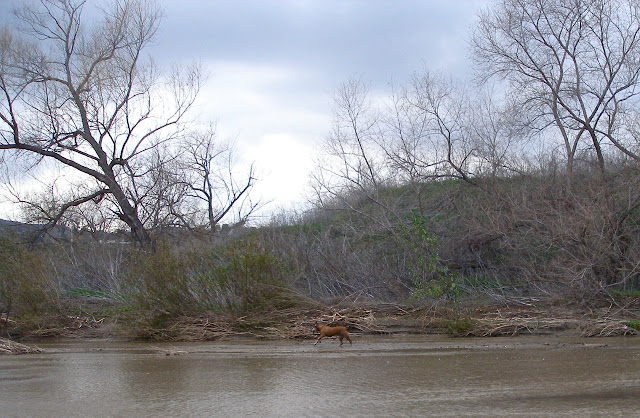 I have a million pictures of Boz running. I wonder what goes through his mind when he's running. Maybe nothing. After all, he's a person, but he's not a human being. He lives with our constraints because we feed him and we're his pack. But when he runs he's a dog, pure and simple. And I do mean "simple." As I write, he's blissfully licking his towel and he's been at it for about twenty minutes.

They say the larger the dog, the shorter the life span. At 70 pounds Boz is on the large side of medium, or the small side of large. Then again, all that exercise makes him healthy for his age.

They also say when you adopt a pet, it becomes a family member. We felt that truth as we adjusted to Boz, and he to us, eight years ago. Before he moved in we were a happy couple. Boz made us a happy family.
Posted by Petrea Burchard at 12:01 AM

A dog and his watershed.

Wonderful photos of the Birthday Dog. And I love how you describe him and his place in your life.
Happy birthday, dear Boz!

Happy Birthday, Boz! May you enjoy many more of them.

Happy birthday to your beautiful Boz. May you be blessed with many more years basking in one another's love and company. And running.

Happy B-day, Boz! May you run for many more years and share in the joy of the family!

Aint nuttin' better than a loyal dog. Unless it is a loyal dog with a birthday today.

He's a good boy and I'm madly in love with him. He's getting a new bone today, but shh! Don't tell him.

Your lovely comments on Boz spreads a rush of joy for we (me) animal lovers. Thank you, Petrea and Happy Birthday to Boz!

I think his silvery mask is dashing

Thank you for indulging me when I post about Boz. I could do a Boz Daily Photo blog and drive you all away very quickly.

Happy Birthday Boz!!! What a great way to commemorate his birth into the family!!! Your love for Boz exudes all over the internet whenever you post about him!!! It's no wonder we all love him too!!!

And doing the Lido Shuffle, doubtlessly

Happy Birthday, Boz! He's such a good boy. I hope he has a long, healthy life.

I let Tommy off-leash in Farnsworth Park today. It gave me great joy to watch him run - he's so fast! And I'm working from home so I now get to enjoy his snores.

Perhaps Boz has some beagle in him and he's imagining he's running to join the pack? What a pin-up he is in that top photo! His love for you is shining through. You could get yourselves some postage stamps made using that picture. (Personalized stamps are on my mind as I saw a pack to make these at the Post Office the other day - $16.99 for 20).

Boz may have had a sad life before you found him, but the last 8 years have been blissful. Happy Birthday, young man!

Which is it gonna be, the theme from "Bonanza" or "the Lido Shuffle?" I can't decide. Maybe something from "Winnie the Pooh."

Susan, are you working from home regularly now? Yay! Tommy must be very excited. Glad he stayed in the park.

I'd love to have Boz stamps, but at $1.18 each perhaps I'll stick with gazing at photos.

Ah Boz, you don't look a day over 10. You might want to try a little Grecian Formula, though -- chicks dig it.

So glad Boz still enjoys running---nothing like watching a pup, no matter how old, enjoy that trot! Looks maybe pit/boxer mix or something? Those ears are adorable!

May he (and you) enjoy many more years, of lounging, exploring, running and loving.

More proof positive that if there is such a thing as reincarnation, I want to come back as the pup of most of the people I know---spoiled rotten, my desires taken care of and to be able to lounge around every day. yay!

All my best Birthday wishes to Boz! What a sweet dog. And lucky too, as he has the pack leaders a dog could hope for.

WEll this is my favorite post of all time. I have had the distinct pleasure of meeting Bozerino and I feel like a family member. Long live our sweet Boz. I hope to see him this summer and give him a kiss and a rub.


As a cat adopter, I feel like I've not crossed to the "other side" but am straddling both!
V

I hope Boz had a very happy day today and enjoyed running to his heart's content, and chewing the new bone, of course, and getting special attention from his pack. :-)

Boxer, probably Pit, we're not sure, Trish. Whatever he is it's a good mix. Someone told us you can get your dog's DNA figured out for a few hundred dollars but I don't need to know. The less breeding the better.

That's a sweet thing to say, Katie. We feel lucky, too. He came fully trained and ready to be a good boy.

Virginia, as a pet adopter you are doing just fine.

He hasn't gotten his new bone yet, Ms. M. He's sleeping off his dessert.

This is from you Haha Park friend, Freckles.

I am very happy for you and your people. Congratulations on training them so well,

Hope you got an extra-special bone for your birthday, Boz!

Boz was thrilled with all his birthday greetings. They brightened his day, thank goodness, because there was no sun and he *needs* his sun. We'll have to come up with something extra fun today.

Hi Trea - so sweet! Wilson sends his regards to Boz. So happy to read about his happy life with you.

One day we all must get together.
LL

Hello, Lovely LL! Getting together would be a treat. Boz would love Wilson, I think.

Happy anniversary to your gorgeous blog.

Happy birthday, Boz! With a shelter dog, we don't know the age, which is perhaps just as well. I have three. The oldest has to be 11 or 12, maybe more - probably more. Looking at Boz and the way he moves and looks so lively and healthy, you'd not imagine he is 13, only when one looks as his lovely grey face. I wish you many more years in each other's company.

Awesome shot. I like how you use the space as a counterpoint to Boz. Really works.

Thanks, Ibarionex. I have two muses: Hahamongna and Boz.