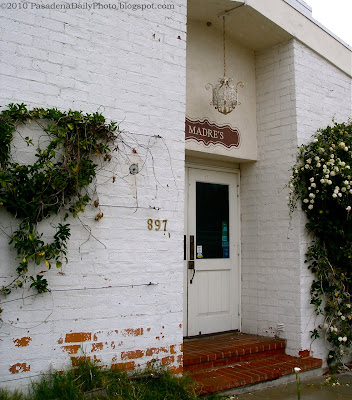 Madre's restaurant might not be a mystery to you, but it was to me. I found it in my wanderings a couple of months ago. This entryway might be gone by now. Such things are ephemeral.

Jennifer Lopez opened this "elegant Cuban restaurant" at 897 Granite Drive in April of 2002. It started out with a bang--such luminaries as Kobe Bryant, Nicole Kidman and even Maria Shriver were there for the opening.

I don't know why it closed (too expensive? not good enough? the economy?), but for some reason it didn't make the cut. Professional reviewers called it pricey, but liked the feminine decor. I tried peeking in the windows but couldn't see much. A sticker on the door said it was Zagat rated. Did you eat there? What are your memories of the place?

I haven't been linking to Yelp reviews due to the class action extortion lawsuit, but in this case Yelp can neither hurt nor help the business and the reviews are kind of funny. Many people went to Madre's to catch a glimpse of J-Lo. It gives you an idea of the grasp they have of the restaurant business, and what kind of reviewers you get on a website like Yelp.
Posted by Petrea Burchard at 12:01 AM

I think restaurant business is like fashion. One day they are in, and very soon out... It looks such a fine place though..

Ooh, ooh, I love this one, Petrea!! Of course, dangle a light fitting like that in front of me and I'm just about anyone's.

I want to buy this place and turn it into a cooking school/gallery.

I agree, it's really really hard to keep a restaurant going over the long haul I think. Here in our city, not many have stood the test of time. All of Frank Stitt's four are still thriving but I think he's the exception. After the new wore off, J-Lo gawkers went elsewhere is my thought.

Love the peeling paint on the bricks. Intentional or disrepair?
V

Not sure I would have been drawn to this star-studded restaurant, but I love the look of it from this photo. If Felicia turns it into a cooking school and gallery, however, I'm there! I've been reading about the Yelp lawsuits and I find it very troubling. I hear Yelp has arrived in France; I wonder if there will be similar issues there.

Aysegul, from one tiny photo at one link, it looked plush. But I think you're right about fashion. I wonder what it takes to make a restaurant a classic and stand the test of time.

Isn't it fantastic, Shell? I have a closer shot I might send you.

Felicia, you already have a student in Katie. Not a bad start. And if your school is different from that other one (and somehow I know it will be wildly different), Pasadena will be known for its diverse cooking schools.

Hello, Isaac. Thanks for the review. If it weren't so early in the morning I'd ask for a beer with that.

Katie, I agree the Yelp thing is troubling. It's fine to aggregate opinions at a website as long as we take them with a grain of salt. But when the site owner messes with what we read, there's a problem.

My son knows the Yelp people from when they were starting up and I asked him about the bad things people are saying about them. He says it's not true at all. I'll ask him the details again if you like. I wish I'd paid more attention when he told me them.

I went to Madres twice and each time it was packed with hip and beautiful Latino (or maybe Cuban?) 30-somethings having a great time. They didn't look like the usual Pasadena crowd. The table decor was white and frilly and lovely but the food prices didn't match the quality and we old folks found it too noisy for a romantic tete a tete. Pasadena, close to San Marino, was probably the wrong location for such a hip place.

never went to Madre's, but as one chef friend of ours said "You don't open a restaurant to make money, you get by".

As to Yelp, everyone associated with them says "it's not true" however, we know more than one business that was told by a yelp salesperson that it would cost $5k to keep good reviews up, and bad reviews off their yelp page and to keep them in circulation. I have yet to talk to a business owner who has had a good experience with yelp. I read the yelp stuff with a grain of salt and have plenty of other options for looking at reviews including opentable (which I also read with a grain of salt, but alas, this is the world we live in).

In a prior life..is this Granite?..and I forget the prior to that. Spent many lunches over the years + many cocktails.

You are right - some of the reviews in YELP are a hoot. One would kind of figure JLo would have a classier looking exterior (er, building). Your photo is so inviting in a common sort of way!

Never made it there. I hear it had a nice bar.

Hilarious yelp reviews. I hadn't heard about the lawsuit or J Lo's restaurant. I need to get our more. It doesn't sound like I missed much though. Still, I love the photo.

I am still sad that Pinot at the Chronicle closed. It was a delicious restaurant--at this same site.

Madre's had a nice happy hour, but could never measure up to the Pinot, for me at least

I did go to Madre's once. It don't recall it very well. I think I thought that if J-Lo didn't own it, they would not have gotten the prices they were getting. I think I went there when it was Pinot, but I liked it even better when it was just The Chronicle.

If you liked Pinot, you should check out Palate in Glendale. It's owned by one of the top guys from Pinot.

Let's see, J LO took in about $75,000,000 last year. I guess it didnt come from a sandwich joint. Truth is people like J LO sell their name for 30 pieces of silver and never invest a dime into the economic endeavor. I call them human parasites.

Dez reminded me. It was great in a previous life.

I've been gone (long day) but you don't need me in order to have a great discussion. A couple of things should be answered, though:

Brenda, I don't know how long it's been closed so it may be a bit run down. However, I ran into some friends this evening who told me they loved the place, and that the decor was "shabby chic."

I'd love it, Petrea, if you get the chance. Thanks so much!!

I'm sorry you didn't get a chance to experience the first restaurant at this site, The Chronicle. An amazing place, mercifully not painted all white, with extraordinary food and the most extensive wine cellar. It was also cozy and romantic, a Pasadena - San Marino institution.

The parters who owned it may have lost their shirts on the posh but ill-conceived for Pasadena La Couronne further up Lake Avenue (in the Commons).

A memory jolt. The Chronicle was not the first restaurant at this site. The earliest that I know of was The Honker, a very chic restaurant that was also an institution for Pasadena - San Marino society.

High end restaurants have a struggle in Pasadena as those who would logically support them (they are pricey) are also fickle. Some like to stay with the tried and true; others drift away to whatever is new and trendy.

Thanks for the info, Anonymous.

Interesting to be away and then read folks comments. Went to Madres several times and always found the setting lovely, but the food over priced. It was pricey and crowded; enjoyed the food at Xiomara's quite a bit more and it never felt like there were two table too many. The Latinas and Latinos who went to Madre's were often local young professionals of Latino origins. Quite the pan Latino group - Cubanos, Chicanos, Mexicanos and so many more.