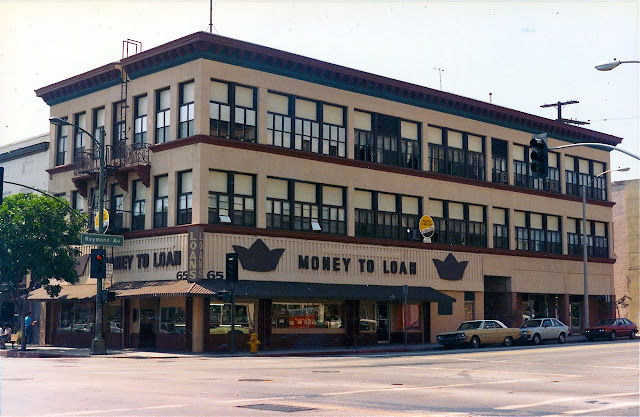 Someone once told me the Pawn Shop at the corner of Colorado Blvd. and Raymond Avenue was one of the oldest buildings in town. But I hadn't known until I took the Pasadena Heritage Old Town Walking Tour that it was designed by our famous local brothers, Charles and Henry Greene.

Today's first photo was taken by Terry Griest, looking toward the building from the southeast. Terry has contributed several photos to the blog, all taken in Old Town in 1984 for a college report. Aren't we glad she saved them?

Built in the late 1800's, the Kinney-Kendall Building was at first the home of Metcalf's Pharmacy and Charles Gardner's Dry Goods. I don't know how long it's been a pawn shop, but the online reviews for Crown City Loan & Jewelry are positive, and I see "over 50 years experience." 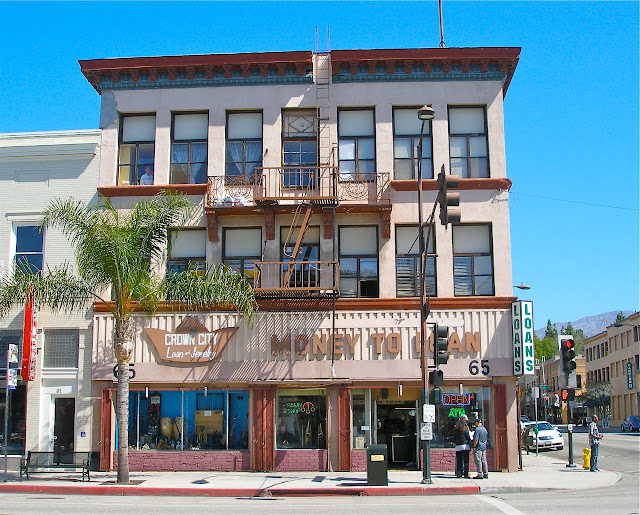 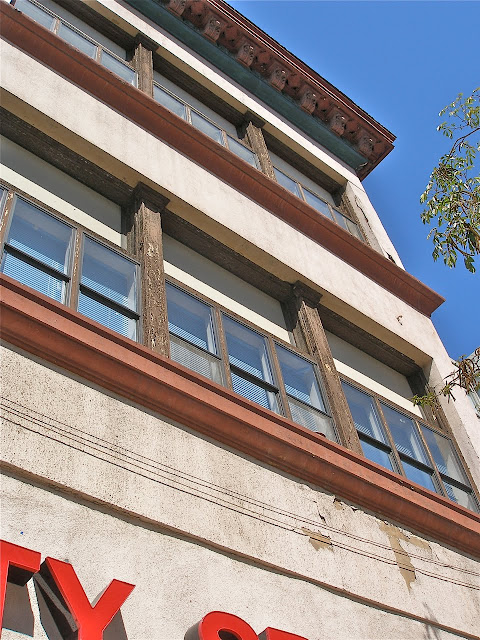 Here's a closer look on the Raymond Avenue side of the building. I've messed with my photos a little, removing shadows so you can see the details.

I told Terry I think the difference between our photos is that it looks like the Kinney-Kendall building had received a new paint job in 1984 and it's still sporting that same paint job today.

Here's something cool: I found the plans for the building online.
Posted by Petrea Burchard at 12:01 AM

That pawn shop has been there since the pre-Old Town days. I've wondered how the few businesses that were there before Old Town took off have managed to stay there, given the astronomical increase in property values. But for whatever reason the pawn shop, the sex shop, and the 35er bar, have survived.

I was surprised to see the building looked better in the 1980s than it does now, unlike the Dodsworth. It's a beautiful Greene and Greene, but with the bars on the windows and the bad window displays, it's a reminder of "old" Pasadena and I feel uncomfortable just walking by it, though I've heard there are some good bargains inside, especially engagement rings.

I've been missing a lot of great photos this week. Head in the clouds...me.
I lived in Pasadena for about about 12 years - pre Old Town - and remember how we used to say that the area had great possibilities and could be something like Old Town in Chicago.
It is fun to see the old and the new "Old".

Before reading I thought that photo #1 made the building look far better than it does in real life. Now I get it. (But actually, your two photos also make it look a little spiffier.)

They were renting a room or apartment on the second floor. Would love to take a look.

I wonder if the current paint job is really a faded version of the 1984, or if they just changed the color a bit at some point. Loved looking at the original Greene & Greene facade in your link.

Speaking of which... they have started to put the rosettes that Laurie and I were worried about back on the Mission/Fairoaks bank building!

Nearly five years in Pasadena, Mr. Earl, and half that time photographing it, and I still haven't seen the 35er and the sex shop. I've probably walked right by them. Are they in Old Town?

As for the paint job, I'm only guessing. Remember, I lightened my photos.

I'm not uncomfortable walking by the pawn shop, Bellis. "Pawn shop" has connotations, but this one seems to be a nice one. I've never been inside, though.

Shanna, you never have to apologize for missing a post! I get caught up for days/weeks at a time with no time to visit blogs, so I know how you feel.
I worked in Chicago's Old Town from 1978-1984, and left Chicago in 1988. I don't remember a time when that Old Town was as nice as Pasadena's.

Who was renting a room, Hiker? The Greenes? I'd like to see inside, too. If you blow up my main photo (#2 in the post) you might see a tenant.

Isn't saying you haven't seen Le Sex Shoppe a little like saying you only read Playboy for the interviews? ;-)

Yes, P, they are in Old Town. Le Sex Shoppe is at 45 E. Colorado on the north side of the street. I believe it's a little ways west of the pawn shop. I'm sure it's been there since pre-Old Town Days.

The 35er is at 12 E. Colorado on the south side just a bit east of Louise's Trattoria.

There used to be the funkiest sort of greasy-spoon-looking place where Louise's is now. I never went in there, but it looked like a classic dive. It would be great to find some photos of that. Some of your readers may have a better memory of it than I do at the moment.

Okay, I know where the 35er is. I guess I just never noticed its name. You'd think I'd have noticed the name of Le Sex Shoppe though!

The only things I miss about the old Old Town are the E-Bar (espresso and live music in the alley behind The Art Store on Raymond) and the red leather booths of Ernie Jr's Taco House (south side of Colorado, west of Fair Oaks).

Ernie Jrs. was vestige of pre-Old Town, and it survived into the Old Town era for several years before giving way. I'm not sure about Barney's on the north side of Fair Oaks, if that also pre-dates Old Town.

Gil's Grill, Mister Earl. I think that's the spot you are thinking about that used to be in Louise's spot. I've got the '84 shot of that, as well as the 35er and the "Adult Books" and "Movie Arcade" as it was known before Old Pasadena got fancy and it adopted its French name.

Ernie Jr's, too (doesn't seem that long ago that they closed this location!) along with the little alley outside the Espresso Bar, the place I miss the most.

Barney's was around in the late '70s. That was the early evening darts and beer place and the John Bull Pub in the Dody Block was for later at night.

From the Ernie Jr's site:

"In 1944, the Cruz family introduced Ernie's Taco House #1 located in Lincoln Heights, CA... Their last location, Ernie Jr's Taco House #4, was opened by Albina Cruz in Pasadena, CA. which opened in 1955 and remained until 1998."

Terry: Would love to see your 1984 photos of those locations. Do you have them online somewhere? Where in the Bay Area do you live?

Hey guys: I just got an email from Terry. What would you say to a PDP series on 1984 Old Town by guest photographer Terry Griest?

I would love it, by the way.

Terry: I don't think I knew that the John Bull was in Old Town. For many years it was on south Fair Oaks, near South Pasadena, where El Chollo is now. Do you know when it moved from Old Town?

I would love it too, P. I think you could have guessed that!

In my younger slightly less callow days the history of where I lived wasn't very significant. But now, when it looks like the world's going to be covered in a giant oil slick from the Gulf, it seems like it should at least be acknowledged.

Wasn't the John Bull in the Doty block? I think I remember that from when we were posting about it. Could be wrong.

Where did you grow up, K? Or are you referring to the history of where we live now in the past tense?

ERNIE'S is alive and well in Eagle Rock! And is near most major freeways...
Ernie Jr. remembers me from the location in Pasadena in the 70's.
It has great parking and is on a hillside with views out the large windows.
Near the fountain is a very nice , very large painting that Ernie's mother commissioned. It is a copy, but well painted.
I always ask that the cheese be left off, cilantro be added and thay are glad to oblige. The salsa is great. They have learned a few things.
I would say they are dependable but not adventuresome. I have a few faves on their menu.

According to Wikipedia, the John Bull was located in the Doty Block (Carver Hotel Building), but all the tenants were removed in 1985.

The John Bull then relocated down Fair Oaks near Glenarm until it was replaced by El Cholo. We used to dance there in the 90s to Flat Top Tom sometimes, and usually to a Beatles cover band that I think was called Backbeat.

The John Bull Pub was an off-shoot of the Loch Ness Monster Pub (now Old Town Pub)
The L.N.M.P. was freak central for some years, operated by two Scots who worked for Parsons. Very authentic. Many evenings were spent enriched by music and beer and other additives. Included in this mixture was a certain stuffy English Rolls Royce owner who drifted away from LNMP to found the John Bull Pub, a more up scale (if possible at the time) operation. The building (Doty) was previously a hotel for servants who arrived with the winter crowds staying at the Green. Once filled with artists and others, the last photo art event I attended,the interior plaster walls were stripped, all the walls were Lath,creating a most interesting view into other rooms.

The Braley Building at 35 South Raymond was another enclave of freakdom. My friend Rosemary Reynolds ( Aluminum fame) held out for a while along with Nick Danger, Private Eye...had a eye hole in the door...

Thanks for the link, Petrea. So cool to see the original plans.

The Braley Building is still an enclave of freakdom, though of a somewhat-less-savory kind.

Shanna, it's nice to know Ernie's is alive and dependable.

Good info, Earl. (It makes us both correct, I like that.)

Pascal Jim, and all you guys, the information I learn from you all amazes me. I have never come across the
Old Towne Pub before this discussion. (Click on the link to find out why.) I'll have to seek it out.

As for the Doty Block, it was first named the Hotel Carver. You are correct, PJ, it was originally a hotel for African Americans who came to work in Pasadena, especially as staff in the Hotel Green across the street.

Hi Dive! You and I like that kind of stuff. The difference between us is you can read it.

Has anyone seen that the Crown City Loan & Pawn has just removed the corrugated metal that covered the top of the first floor windows all the way around? Jim Plotkin says that metal has been there since the 70s. It looks like they are going to begin refurbishing the building (exterior at least) so stay tuned for an improvement, hopefully a return to its former glory. Step one...

Thank you, Janet, yes, I was just by there today (thanks to a tip!) to get some shots to post. I'll put them up this weekend so people can see. It's an exciting change.