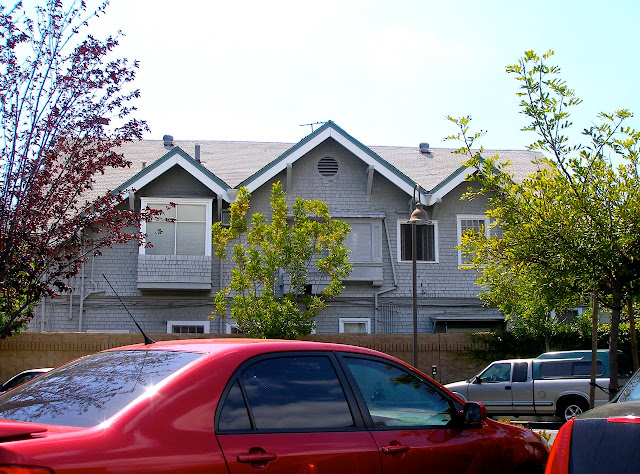 Why are we gazing across a parking lot at the back of a building? Isn't this Busch Gardens Traces Week on PDP?

Why, yes it is. And this is the biggest trace of Busch Gardens, or actually of the Adolphus and Lilly Busch homestead, still standing in Pasadena. This building, on Arlington Drive near Fair Oaks, was once the Busch stables. It was moved from its original location behind the Busch mansion at 1021 S. Fair Oaks in 1910.

That was a hundred years ago. It would be a huge undertaking even now.

Don't you just love this stuff? 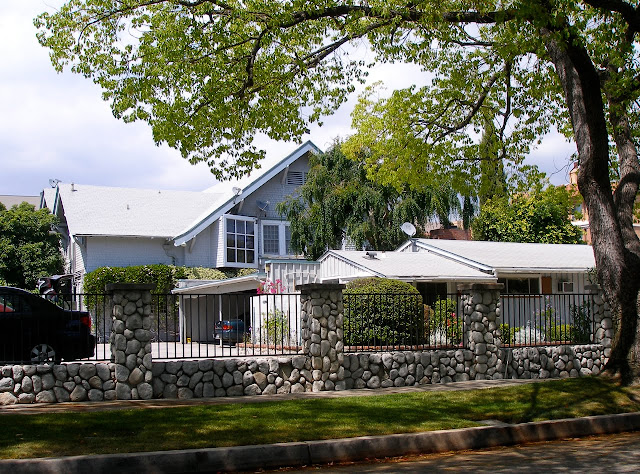 Here's the view from Arlington Drive. The stable is the larger building at the rear. I don't know what it's being used for now. The building in front has a sign on it that says "the Mews." I couldn't find it online. It might be a private home.

Just to get my facts straight: I took furious (though unfortunately not copious) notes during Michael Logan's lecture May 22nd, and I thought he said these were once the John Cravens stables (the Cravens Estate, which still stands, would have been close to the Busch home). But in Logan's own article in the May issue of Cottages and Bungalows magazine, the building is referred to as "Busch stables." One thing is certain: this building isn't listed as a Pasadena Designated Historic Property, and it should be.

Grab a copy of the magazine if you're interested in seeing this building in its original location. I haven't found a photo on the web but there's one in the article, a charming stroll through the gardens back in the day as imagined by Logan, who can picture them as clearly as a photograph.

Update, 6/12/10:
In an email from a person who lived in "the old barn at 55 Arlington" from 1987-1997, she said:
"It is divided into apartments now. I lived there for almost 10 years and loved it. It takes earthquakes very well (Northridge quake). I was told by
the owner at that time (Stan Stanislawsky - whose son is an accountant in
Pasadena) that it was the Busch barn and the apartment complex next door - to the west - were the chicken coops. The coops are apts also and also
very quaint! The barn should be on an historical registry. I moved out at the end of 1997. I don't know who owns it now."
Posted by Petrea Burchard at 12:01 AM

We have friends who bought an old Craftsman home from Holy Family in So Pas for dollar (HF was expanding and it was slated to be torn down) ...they then moved it to it's current location (that was the big expense)...They restored it and now live in one of the loveliest homes in the neighborhood!!!

Looks like a wonderful place with all the green..

Judy D. and I visited the Craven mansion ( and i do mean MANSION) which is the site of the Pasadena Showcase House. Gawgeous.

BTW, that reminded me that my third graders always spelled it MANSHUN! Well I did what I could.
V

Great adventures in Sleuthdom. Thanks.

Your series is on the Busch Gardens the best. I have so enjoyed it. I see the Mews also used river rock in their wall. I like it. Well done Petrea you have educated all of us.

Mr. Logan educated me (along with an auditorium full of people). He did the sleuthing, too. Then after our tour, Bellis, Altadena Hiker and I drove over to see what we could see, and there were the stables. Did I mention Bellis and Hiker were there? Tune in tomorrow.

It's a beautiful area, except for the parking lot! If I were to buy a fabulous home and go to the expense of moving it, I'd be very disappointed if someone ended up putting a parking lot next door.

That Cravens Manshun is too big to move, by the way.

I gotta say, I'm just loving the tour you are giving us of Busch Gardens. Keep it going!

Thank you, Ben. I'm glad people are enjoying it. I'm working on tomorrow's post and I realize I've been enjoying it, too!

Such a fascinating series! It's amazing how much history is hiding in plain site. Thanks for bringing these gardens to us.

I wonder if Adolphus Busch keep Clydesdales in those stables? I love seeing those huge, gentle horses pulling the Anheuser-Busch/City of St. Louis float in the Rose Parade.

I can't wait for tomorrow!

Wes Craven only wishes for hauntings like these, Miss H.

Katie, I'll bet you've got stuff like this all over the Berkeley hills. Or SF, at least.

Bellis, I wonder! I'd love to see inside that building. I suppose it's changed a great deal.

For those still subscribed to this post about the "Busch stables" at 55 Arlington, I've just added an update with new information.

How cool!!! I'll bet the apartments are quite cozy and charming!!!

I'd love to see them. I wonder if Logan and Cowles know about the chicken coop. I haven't seen it mentioned anywhere else. I'm going to try to get in touch with them.

It is believed that Mr. Cravens originally used the stables to house his prize thoroughbred horses. When the building was moved to Arlington at Fair Oaks the lower level was used as a garage for the chauffer's cars while the upper became the residence for the Busch Gardens superintendant Mr. McDermott. Busch owned the whole block and grew vegetables as well as raising chickens and turkeys. The main reason for purchasing the property was to build a pump house for a well that would provide all the water for the Busch Gardens.Thank you Petrea for thye kind words. Michael Logan

Hi Michael! Thank you for your comment, it's a great addition to the post. I hope you'll stay in touch. My email address is in my profile. I'd love to be on your mailing list if you've got one.