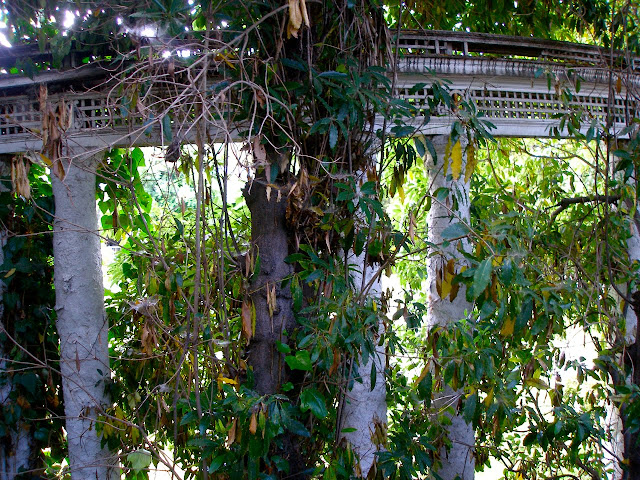 You've probably heard about Busch Gardens. There's a Busch Gardens theme park in St. Louis (Grant's Farm), one in Williamsburg and one in Tampa Bay. There was even at one time a Busch Gardens in Van Nuys, California. But the original Busch Gardens was here in Pasadena. It wasn't a theme park. There were no rides. It was simply a magnificent garden. And yes, that's past tense.

You can click on Google's map and see where the 38-acre park was located. Generally, the grounds were bordered by Orange Grove Blvd. on the east, the Arroyo Seco on the west, Bellefontaine St. on the north (or just above it), and Madeline Drive on the south. Or thereabouts. It wasn't a square.

Originally the back yard of Adolphus Busch of Anheuser-Busch fame (he was married to Lilly Anheuser and later bought a share in his father-in-law's brewery), Busch Gardens was opened to the public soon after completion in 1905 and it attracted as many as a million visitors a year until it closed in 1938.

Although most of the gardens have been subdivided into residential tracts, traces of garden decor remain. Most are on private property though some are visible from the street. And this is no middle class, suburban neighborhood. Adolphus and his cronies had 38-acre yards and I guess now most people don't, but folks in that part of town still have an acre or two for their mansion. It's exclusive and oh, so heady.

The trace above is on the other side of an iron fence alongside Madeline Drive west of Stoneridge. I recommend you enlarge the photo to get the idea. (I had to stick my camera through the fence to get the picture--a small camera comes in handy.)

Wouldn't you love to have something like this in your yard? I don't even know what to call it. I'd like to have a folly of some sort--maybe a column, or a piece of iron scrollwork--but this thing is so huge it would look pretentious in my yard. It looked right at home in the expansive yard it occupied.

Scroll down to Saturday's post (5/23) for more details about the Busch Gardens tour.
Posted by Petrea Burchard at 12:01 AM

Nice. I take it that the Busch mansion is no longer with us?

Last summer I stayed at the Adolphus Hotel in Dallas. It was built by Adolphus Busch as the first luxury hotel in Dallas, and opened in 1912.

You're correct, Mister Earl, on both counts. The mansion was at 1021 S. Orange Grove, which is now condos.

Great photo and a great history lesson. The Pasadena wealthy knew how to live it up during the guilded period. I have been to Busch Gardens Tampa Bay and it is spectacular.

Those people had a lot of money, Mark, and a clear idea of noblesse oblige. Our current local wealthy are also often heavily involved in charity, though I don't have any statistics for you.

Initially the Busch family opened their gardens to the public for a small fee that went to charity. Many of our current wealthy and generous Pasadenans also open their beautiful houses and gardens for charitable causes, but the ticket prices are often in triple digits - sadly too much for me.

I remember going to Busch Gardens in the SF Valley as a kid. I didn't realize it was in Van Nuys, but I do remember it was quite a treat long before I ever went to Disneyland.

WEll I"m glad you are the photo sleuth of Pasadena. Way to go, cramming that camera through the fence to snag this lovely old piece of garden art.
V

My Grammie used to take me out to BG in Van Nuys when I was young. To this DAY the smell of warm, stale beer brings the song "Those Were The Days" to my head. They apparently gave free samples, which apparently drew Grammie there. I loved everything else about the place.

As to the Pasadena estate, having been a Westridge gal, knowing a number of Mayfield Senior girls and knowing a number of folks who lived in the area, I can attest to the local elite supporting the surrounding areas. I couldn't begin to count the number of charity events at homes along the Arroyo I either knew about, or attended. Some of the uber class folks DO get it, still, that they have a responsibility to help. I do still know a number of folks who live near the old BG near the Arroyo. Some aren't as uber wealthy as one might think, and there are certainly many fewer in the class of Adolphus, which is why many of those properties have been broken up--for the rest of us to have some chance of affording.

Bellis, I remember our tour guide said the price was 25 cents for adults and 10 cents for children, and this was around 1910. Some people in our group thought this was expensive for the time. So I guess not much has changed!

I lived in Van Nuys for a couple of years, Karen. I wish I'd known about the park then, I'd have done some sleuthing. (Not that it's out of reach now.)

I think it's lovely, too, Virginia! I just gaped when I saw it. I hope the owners are taking care of it. Too much stuff growing on it might weigh it down. I'm worried about it.

I always love your comments, Trish. I do remember reading that beer was free at the Van Nuys Busch Gardens. Hmm.

Your Pasadena stories are full of your memories. I wante to hear more.

The P.E Trolley Barn, located across from Memorial Park, tracks ran on Raymond, crossing Colorado (Green & Green Building on N.E corner) Trolley's ran South under the Green Hotel Bridge to California, turned right (West) to Arroyo Blvd. The end of line is noted in the current street arrangement with a circular bump-out.
This provided a short walk to Busch Gardens. Somehow we are all connected....

Never knew there ever was a Busch gardens in Pasadena...I did go at least once to the Busch gardens in Van Nuys...and I do remember that there was the allure of free beer...(though being a wine drinker from way back, that did not entice me!!!)

Chieftess---we often thought Grammie was just a white wine drinker...turns out, given the opportunity, she'd nip at other things as long as it was hidden or "en vogue" or "free" as with BG in VN.

Petrea---keep posting things, what I remember, I'm happy to share...but if you ask me to just spout about things that happened...oy...not so easy. Though I just remembered as a young, exploring child accompanying Grammie who volunteered at RC, I found a "secret" passageway at the Red Cross---apparently in olden times, someone installed a little door, just the right height for me to find and climb into. Couldn't figure out why people on the other side of the wall were calling my name---*I* knew where *I* was, what was the big deal?

I also spent many years riding my bike up and down that Arroyo, all over SoPas, hanging out near the Rose Bowl or in Linda Vista---many, many memories. And many things I have no clue about----so, half is sharing knowledge and memory, half is learning!

My husband and I almost bought a house that had remanents of the Busch gardens running through it. Sadly, however, it was not a mansion. It was, though part of an area that had been subdivided into middle class houses. All of them along this street had paths and remains of walls and stone benches in their backyards. We were told that the neighbors, once a year, opened up all their back yards to a "Busch garden hike."

There is, also, one outpost of the Busch mansion left -- owned by one of the Busch family (now elderly) still in Pasadena. It's often used in movie and tv shoots.

And my last tidbit is, that around the time of the big crash in '29, the Busch family were vacating and giving up the gardens, and offered to donate them to the City of Pasadena.

Reportedly (Pasadena PIO probably has the real scoop) Pasadena turned them down because -- due to the economy-- they wouldn't be able to afford the upkeep. So the gardens were more or less abandoned.

Don't know the real truth behind this... but it would be great to find out!

My grandmother first told me about the gardens. She related a story about my father who as a tiny tot was so absorbed watching the pollywogs in some water feature that he fell in head first. I wish I'd asked more questions.

btw: Bush descendents are still around. One of them sells Jack Russel Terriers (or used to) Long story...just trust me on this

Very interesting history. And I love all the vines on this garden art piece. :)

WOW! How interesting are these comments. I love history and now I think I could pass an exam on The Busch Gardens of Pasadena. I love these posts Petrea. I must visit Pasedena soon. Im offically hooked.

Oh to have wild treasures like this hidden in my yard! I've been to Busch Gardens in Williamsburg, but I'd much rather visit the secret hidden Busch Gardens of Pasadena.

Today's comments are delicious, aren't they? Imagine the trolley turning around at the intersection of California and Arroyo Blvds--convenient to the Gardens, and I'm sure that was no accident, PJ!

Chieftess, Trish and Karen: I spent time today with a friend who grew up in the Valley and remembers Busch Gardens. She told of going with her friends (too young to drink) and looking down into huge vats of beer.

Trish, are you talking about a passageway at the Craven House?

Kat, I'd love to know where that Busch house remnant is. As for donating the gardens to the city, the way Mr. Logan worded it in his lecture was that when the gardens were closed in 1938 (not '29, although the economy was still not great at that point), they were "offered to the city." The city turned down the offer, but he didn't say why. Upkeep and economy may have been it. Now the city has a portion of what was the gardens, in the Arroyo Seco. A bit overgrown, but still beautiful.

PA, I'm charmed. (I wish I'd listened more to the old folks, too. I'm sure when I'm old I won't be able to get anyone to listen to me. It may be too late already.)

Don't get me started, Ms. M. I want this thing in my yard.

Mark, I think Pasadena's a pretty nice place. You won't get any argument from me.

What a treasure it must have been, eh, Katie? I think Pasadena does a better job of preservation than so many American cities do. But I guess we can't keep everything or the word "nostalgia" wouldn't have been invented.

Very interesting. Thanks for that bit of history!

What a beautiful entanglement of yesterday in this photo. I'm glad to know that Busch Gardens doesn't just mean roller coasters and killer whales. Great bit of history.

This is a neat series, Petrea!
(«Louis» started at the top and worked his way down before commenting.)

hee hee -
The word verification is for cat lovers:
kitti