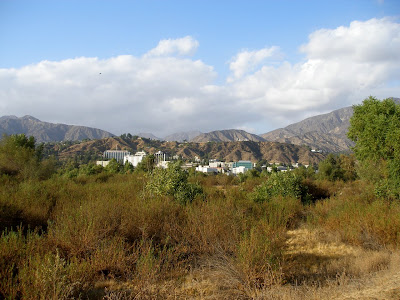 NASA's Jet Propulsion Lab hunkers down in the foothills of the San Gabriel Mountains. Enlarge the photo (or, as the Altadena Hiker says, "enbiggen" it) and you can see patchy scrub growing on the low hill behind the campus. The higher mountains beyond are barren. Every bit of vegetation that once grew on them burned in the Station Fire, which began on August 26th. Amazingly, the Station Fire continues to burn in small "nuisance smokes" today. The fire's been at 98% containment for a couple of weeks now.

These empty, gray mountains go on for miles in either direction. As you drive through the towns below them it shocks you how far the fire went. And you see what the firefighters had to do: they beat the flames back and protected towns and structures. Beyond that, they had no choice but to let the fire go. 250 square miles of it. They saved the people. They couldn't save the forest.

In time, the forest will renew itself.

What if there had been no water available to fight that fire?

As of last count, 9975 blogs in 151 countries (and counting) are participating in today's Blog Action Day, expecting to reach over 13 million readers in a global discussion of climate change.

At the Copenhagen Climate Summit in December it will finally be time for America to step up. From Here to a Global Climate Treaty, a recent blog post at Avaaz.org, gives an idea of where the United States stands. There's a link to the Senate Finance Committee so you can see just which individuals it comes down to, besides you and me. We are a top emitter of greenhouse gases. We can urge our senators to help us take responsibility for our emissions. We can do something.

I think we can all agree climate change is happening. I'll leave it to the scientists to figure out how and why. Other crucial issues exist, but if there's not enough food because the earth can no longer grow it--if there's not enough water left on the planet to drink, let alone protect us from the inevitable fires brought on by global drought--then nothing else matters, does it?
Posted by Petrea Burchard at 12:01 AM

When I flew to Kansas a couple weeks ago, the plane went directly over the San Gabriels and I was glued to the window as usual.

It was amazing to see how much area was burned, and where the firefighters had made stands to protect things like the Mt. Wilson Observatory.

The damaged area is just massive.

Hear hear! It's appropriate that you're showing JPL today, because many of their satellites are monitoring the health of our own planet and how it's changing. Climate change doubters are always saying "We need more data," so that's what JPL is providing.
You've managed to photograph the bare mountains! Every time I try, they're shrouded in mist, as though ashamed of their nakedness.

Just checking in, because I knew you'd post. This issue so overwhelms me, I really don't have anything to say or add.

Back in late August, when the Station Fire was raging, 60 Minutes ran a story on such "megafires" that was really daunting, suggesting that many/most of these areas are SO damaged, they WON'T come back:
____________________

Tom Swetnam told Pelley with these new super hot fires some forests may never grow back.
_____________

"We used to have forest soil here that might have been this deep," he says, indicating about a foot of depth, "but now we're just down to rock."

"So you're down to mineral and sort of a rock, sort of armored soil. And that is not a good habitat for trees to re-establish," Swetnam says.

"Where do you think all this is headed?" Pelley asks,

"Wait a minute. Did you just say that there's a reasonable chance we could lose half of the forests in the West?" Pelley asks.

"Yes, within some decades to a century, as warming continues, and we continue to get large scale fires," Swetnam replies.

Swetnam says that this is what we have to look forward to. He estimates, in the Southwest alone, nearly two million acres of forest are gone and won't come back for centuries.

Thanks for posting this today.

It is overwhelming, Hiker. Linda's comment overwhelms me even more. Maybe that's why fewer people than usual are commenting today. (Or the post is too preachy, that could definitely be it.)

The planet's not going anywhere. But if we don't do something to manage climate change, the planet won't sustain human life. Doesn't that pretty much sum it up?

Too preachy? Not possible. But I haven't done anything to change this. Shame on me.

The Station Fire probably didn't need to grow to the largest fire in LA County history. Something smells funny or smoky.

Click on Avaaz.org, or send some money to Al Gore's cause. It's a start.

I'm thinking the same thing, Cafe. Yes, it was arson. Yes, we're in a drought. But 250 square miles? This is a perfect storm waiting to happen. Our water situation is precarious and it isn't getting better or even holding steady. It's getting worse.

And water? This is a little thing, but did you notice all the auto sprinks going off in the middle of our little October storm? How hard is it to click "off."

As for sending money here and there, I'd rather do something more hands-on. Whenever I send money to a cause (and I do, and often), they just spend it sending me more letters for more money. Wish there were a check box to say no to that.

I worked for a charity that sent out those annoying requests, and when we asked them to stop it, we were told that people who give once are very likely to respond to every subsequent request. (These may be the same people that respond to spam mail, and buy winter clothes in summer and vice versa.) As for slowing down climate change, we need to go back to the lifestyle of the '50s.

Definitely not too preachy, Petrea. On the contrary, very well written and in my opinion, a powerful statement. Thank you.

I'm also too overwhelmed by this to offer much except yet another signature and another donation. I read about what Linda posted back during the fires and felt such a sense of loss I could hardly begin to write about it.

The more you look at climate change and the impact we have on the environment, the more it embiggins. Sigh.

I don't think conspiracy, I didn't mean to sound that way. I think our services could have taken it more seriously in the beginning. They perhaps didn't know it was going to travel as fast as it did but they should have, considering how dry it was.

Don't get me started on water wasters. After the Station Fire, how could people possibly think we're not in a serious situation?

Some charities are doing all their soliciting online now, so I think there's "a box" you can check, so to speak. And you can opt out of the e-mailing list if they big you too much. http://www.repoweramerica.org/

I will never give money a second time to a charity that sends me "free gifts." I'm offended by that waste of my donation. However, my husband (who has worked as a professional fundraiser) says many people donate money because they want the backpack or the teddy bear or whatever premium is offered. (I doubt people donate to get the ugly return address labels.)

Thanks, you guys. This whole thing is overwhelming but Bellis has a point about lifestyle. This is where we can make a difference: walk to the store instead of driving whenever you can. Recycle. Etc. We have to do our best.

Hmmm ! Global warming...let's do something about it ! Lots of talk, talk, talk ! No one cares or dares to tackle the real culprit...HUMAN POPULATION !!! Sure cars, factories, coal burning energy plants create green house gases but who uses and needs all those cars...all the things that factories produce, or refine...all the homes and buildings that require heat, air conditioning and lighting ? Well it sure ain't squirrels !
Back when I was a twenty-something young mom there was serious talk about the over crowded world population...talk, talk, talk...let's aim for zero population growth...talk, talk, talk ! I truly felt guilty that I had 3 children and back then there were doctors that would not issue a prescription for those new horrendous "Birth Control Pills", it was considered to be "against God's will".
Now the pill is common place but "population zero growth" has become taboo, instead it is considered a blessing if you are a Kate Gosselin or an Octo Mom or the Duggars with 20 and counting...TLC will even give you a TV show !

But the truth remains, bitter as it may be, that as long as our population continues to expand the way it has so will our problems here on this planet. Now it's global warming, next it will be how to grow enough food and provide abundant clean water for a world drowning in its own self re-creation !
Yeah I know, this is not a popular topic. Especially since all governments and nations rely upon an ever increasing population to sustain economic growth and pay its bills ! Gotta build those houses, cut down those trees, build, build, build.

Anybody gonna call Almost Precious wrong? Not me.