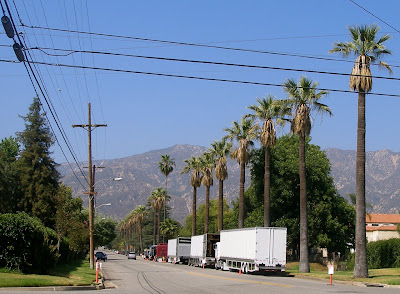 It's not really a yawn. I've been in the LA area twenty years and I still get excited when I see a film crew at work. A crew means good news--good economic news--especially in an area where the economy revolves so heavily around production.

Although California has lost a lot of production to other states in recent years, a good deal of it is still done here. Locals see this sort of thing all the time, but I thought I'd show other folks what it looks like.

So just in case you've never seen a film crew, here's how you spot 'em: It's not the movie stars. It's the trucks. And yes, even the trucks are just a little bit exciting. They're bringing that good news.
Posted by Petrea Burchard at 12:01 AM

Yeah... P sounds like it's keeping you busy & outta mischief. So, I hope you're right about the Good News.

I'd be very excited, too! I love that you're still shiny-eyed about such things, Petrea.

A lot of those trucks are routinely clogging up the narrow streets of Boston, but you're right, people will now tolerate anything to improve the economy and oh, yeah, maybe catch sight of a celebrity.

You got it, Cafe. Although now that SAG has ratified a contract, it feels like things are picking up a bit around here.

Oh, I am, Shell. Every time I see the Hollywood sign I feel like a tourist, and I see it at least a couple of times a week.

P---that's not the link to *that* Mountain View cemetery. That one is located in Oakland. I know for two reasons, one my family is buried in the one in Altadena and two, I've recently been to the one in Oakland. I don't know that the Altadena one has an active website.

Not to be picky, but I'm not sure I've been alive when an entrance to MVC was open to Marengo.

That being said...have to agree about productions moving out of California---a lot of places have aimed their $$$ at Hollywood to entice them to film in their location. It is too bad that CA has driven folks away---we certainly could use the money towards our sickly looking budget.

Thanks for the heads-up, Trish. I've replaced the links with better stuff.

Yeah, we finally got some tax incentives. I hope it's not too little too late. The studios are still here, the deals are still made here. Let's shoot here!

Oh yes! Look for a bunch of big white shiny trucks, immaculately clean, with no logos anywhere. Or follow the big 220V extension cords that they string for the equipment.

I get excited over them too, just because they stir my imagination.

They've been shooting something over in my valley too, last week. I always slow down, look at the trucks. So much equipment. I'd love to be a fly on the wall on a movie set just once.

Good news, indeed. Like Vanda, I'd like to be an unseen observer on a movie set sometime.

For more details on runaway production and how it's hurting the local economy, see this article that details how state-funded tax incentives might or might be as helpful to local economies. Oftentimes, the hidden benefits of having production here in Southern California is far greater than the cost difference.

I am always happy to see filming trucks around, too, Petrea. It means someone is making some money, and putting food on the table for their families. And that's a good thing.

Ooo, I almost forgot (can I do a quick plug, Petrea?): the Pasadena Unified Summer Musical Theatre shows are this week and next: Thurs. 7/30 at 7 p.m. for the juniors (my son is in the cast!); then Friday 8/7 (at 7 p.m.) and Saturday (at 1 p.m. and 6 p.m.) for the senior show. These are great fun, and a good way to support arts education in Pasadena. Unsure of how much the suggested donation is, but these are quite decent shows, directed by local professional stage actors. Okay, back to decrying runaway production...

I've been on a lot of TV shoots and a few movie shoots, and I still get a thrill being there. It's noisy most of the time until they're ready to shoot, then complete silence is required. Because they're miked the actors talk quietly (unless it's a shouting scene), and if you're not right up next to them you can't hear a thing.

Plug away, Loren. We're all for the arts around here. I hear your son is talented (where did I hear that?). And thanks for the link to Kaufman's extremely interesting article.

Good news is welcome in any guise. Even via big rig!

Do you think, if they aren't shooting here, the studios will remain in CA, Petrea? Will they relocate back East from whence they came?
I would have loved to have worked for one of the big studios in the teens, 20's and 30's!

The Scout has had some local work this week...finding green fields in SoCal. Can you believe he actually found some?

I don't think the studios are going anywhere, Cali. They're huge operations and they cover a lot of real estate. It's my hope that these things go in cycles, and the business will recover. It'll probably look different when we come out the other end of the tunnel, though.

WCGB: if anyone could find them, the Scout could. So glad he's got local work! It bodes well.