Then and Now: Hotel Carver 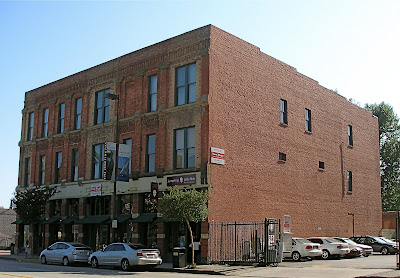 We're picking up from where we left off yesterday. Sort of.

If you knew the 107 S. Fair Oaks Building when it was the Hotel Carver, you understand why I photographed it from this rather unattractive angle. I over-sharpened the photo, so when you enlarge it you can see the detail.

This copy of a well-known picture of the building comes courtesy of Hearken Creative's flickr photostream. Wikipedia's article about the Carver says this mural was painted by Paul Waszink (who I'm told rented space in the building at the time he painted it). The wall, and the proverbial writing on it, was damaged in the 1987 Whittier Narrows Earthquake.

In the top photo you can also see the pale spots where the original bay windows were. The windows were removed in the 1950s when Fair Oaks Avenue was widened.
Posted by Petrea Burchard at 12:01 AM

Irony writ large. I do love that mural, such a pity it's no longer there. Perhaps we could think of a suitable replacement for our times?

Now that I am grown, I am the people of dessert, also. Ha! When I go to a restaurant that is famous for their dessert, I order it first and eat it first (even in front of my mother!).
Sometimes, pleasure must come first.

I love that you've put both photos up here, Petrea. And I'd love to see the original wording painted back up there again. {I'm such a boring traditionalist, I know ...}

Wah. Put it back.

I hope Loren checks in today. I know I've seen a photo of the building with those bay windows still on it, and I think it was hanging in the elevator lobby at 107 S. Fair Oaks.

Yeah. I think a lot of people would like to see that mural again.

Was there a time a time when you could only read the second line of the poem?

then i was definetly one of his peeps ;-)

Margaret---I think there was a time only that second line was visible...but my memory is lacking. Can't remember if it was just worn off or covered over.

...I remember looking at the painting on the building, wondering why someone would put something like that on the side of a building for no apparent reason...then I loosened up a little and figured out sometimes, messages need to be shared.

More info here on how the collapse of the building next door pulled down part of the mural.

I remember all the shots on local TV in 1987 showed this building because it collapsed completely into a pile of bricks. Fortunately nobody was in there any more.

Regarding the second line... Let's just say a friendly visitor is providing me with some historical photos for tomorrow's post. Should be interesting!

Ms. Barlow, thanks for the link. You can see the top of that next door building in the black & white photo in today's post. I always wondered what happened to it, now I know.

Petrea: Sorry I wasn't on here earlier; anyone for a write-in campaign to the current owner to paint the old quote back up? I think it adds character to a neighborhood to surprise confuse people sometimes, and that quote certainly confused/surprised people when it was up...

Trish: Yes, after the '87 quake, the top line of the quote had fallen off, and when new bricks were added to replace the old, the poem was not re-painted. So it read: "said T.E. Lawrence picking up his fork." That befuddled people even more...

Petrea: Here's all that I can find online about what the building looked like with the old turrets, and all of these photos are from the L.A. Library photo archives: First [ http://jpg3.lapl.org/pics23/00061148.jpg ] you can see in this photo from 1941 that the turrets are already gone (the "Go Farther" billboard is on the building we are talking about).

Okay, so I can't find any good photos of the turrets online. Since I have no usable camera, here are pictures from the building lobby taken with my cell phone -- sorry for the quality. First, from the aforementioned collage: http://bit.ly/4SlBD and second, a larger photo that also hangs in the building lobby: http://bit.ly/UfI1D You can see the turrets quite well on this second one. Unsure of dates on both of those photos.

Finally, another pix from the L.A. Library archives: http://jpg3.lapl.org/pics23/00061222.jpg -- this one from 1887! You are looking at Fair Oaks Avenue, but it looks nothing like what we know today. The description says "looking south from Colorado Blvd" but I'm still not sure if any of those buildings still exist...probably not.

These are remarkable, Loren! I've seen the 1887 shot, never seen the one from 1941. Fantastic. You've gone above and beyond, thank you.

Re: Loren's pic from 1887, LA Library archives. Unpaved streets and horses. Considering what we go through at the Rose Parade to clean up after these animals, can you imagine the "ground pollution" if everyone driving cars today were riding around in carriages? And the price of hay would be in the stratosphere, forget growing corn for ethanol.

Yep, those pictures are so thrilling to see of how it was built originally, then added on to by another floor and then turrets and stripped of turrets and then stripped of bay windows...taste being relative, each version of the building creates its own different persona, as it were.

Thanks for all the old pictures; look forward to tomorrow's portion of the triptik(sp?).

Rather small for a hotel isn't it. Poor building sits there like a lone tooth (of a once brilliant smile?).

Finally the mystery solved...I follow the link; what a story. I remember those notices going out. The supposed hell hole that was "Old Town" Pasadena to most was a Mecca to many artist who lost space in the transition. Nothing like finding a 30 day notice on your door. I've been there. Painful. Studios are hard to come by

Oh man, the horse droppings, just imagine, L. Barlow! What a thought. I wonder what the air pollution would be like. Same but different?

Vanda, when I consider it was the first hotel in town owned by African Americans and it was the 1940's, it doesn't seem so small. It stood across the street from its stuffier cousin, the Hotel Green. And in the basement of the Carver was this fantastic jazz and blues club rockin' away at all hours of the night.

That photo from '41 is a period delight on its own.

Eamon sent me over to your site to see the Hotel Carver. The photos and comments are just great. I wish we could see that kind of attention and reaction to restore and reopen our Kress building in Tampa's downtown. It is sitting almost right in the middle of new developement and still on a nice brick street. Your hotel has had a far more interesting history then the Kress, which was always a shopping depatment store. Now it's just boarded up and empty. I really like your blog.

Hi Frank,
I wish this sort of thing could happen everywhere, too. Pasadena's Old Town was ignored after WWII because it was an area of bars and winos. Artists moved in and set up shop in the old buildings. But finally money came along in the '80s and bought it all up. Some say that revived it, some say it was ruined, but this is the modern definition of "preservation." Old Town survives in this new form, as a shopping and dining area.

So I guess what I'm saying is, all it takes is money!

I have three blogs, Tampa Daily Photo, Tampa Bay Daily Photo and Tampa Florida Photo. The first and last are CDP sites. (This way I can spread out and be nuts here or there or fall into a watery, skywatch monochrome haze from time-to-time.

Your site is terrific.

The Kress Building is at http://tampafloridaphoto.blogspot.com.

Sadly, I think the owners have the money but are holding out for some odd, strange reason. They have battled some with our preservation folks and city.

I remember driving by that mural almost every day on my way to school. I had forgotten that was the same building once it was converted into the "Workshops" building, was gutted and made into small offices used by mostly creatives: writers, designers, architects and artists. I had a studio on the 3rd floor for about 6months in 2005 (I'm a visual artist) until the new owners raised the lease. There is a very high turnover. You can find more info on Wikipedia: http://en.wikipedia.org/wiki/The_Hotel_Carver (what a great history) and on the Preserving Japantown website: http://www.californiajapantowns.org/pasadena.html Just a note. I have firsthand experience that the building is haunted. Knowing the rich history now...I am not surprised!

Happy to have your comments, Native. I've seen the Wikipedia article (used it for researching these posts); much of it was written by a man whose studio was there in the '80s. Interesting and useful.

Come by any time!