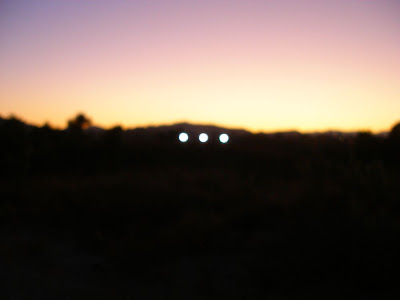 On Zen Monday you experience the photo then tell me what it's about, rather than me telling you what to experience from viewing it.
Posted by Petrea Burchard at 7:30 AM

Well, this is sacrilegious (at least, it probably will be to the particular faith I'm about to poke at), but it immediately called to mind the Mormon myth about Joseph Smith seeing a vision of God. So, I'd call this "I did see the trinity and it was bright."

You may have one lousy lens though you saw me. What do you think I am looking at right now?

A three-eyed bobcat hiding in the bushes.

those are the guys who abducted me last time I was out painting a sunset... they're back!!!

I'm going to have to think about this later, because my coffee hasn't kicked in, and I can't seem to focus.

The aliens have landed!

Who punched holes in the mountain?

I have no idea what this photo is about, but for some inexplicable reason, I have just built a mashed potato tower on my dinner plate...?

Elaine, it's not you—it's the photo. She cropped something from the distance …

Did she go into the kitchen?

The photographer in me immediately said "oops! I always end up with a few of these.

The hiker in me said "better get down the hill, sun is setting, or at least into that building looking thing on the left".

A part of me suggested that something had landed, or was taking off and I'd better get out of their way.

The part of me with spectrum issues and hence, sees things just a little differently suggested that maybe it is a superimposed 3 digit signaling system in line with a ScanTron form to mess with our minds---and we have to choose which bubble to fill-in in order to allow the sun to set (or rise, as the case may be).

Sigh...back to a nap, that was a lot to infer from one photo!

Okay—well, while she gets more coffee, I'll just note that this first made me think of "ghostlights," known in the USA as Will-o'-the-wisp.

But really what I'd like it to be is a bunch of tipsy Druids, wand'ring back to their henge after a night on a bald mountain …

Laurie- I had the same thought. Perhaps it's "one if by land, two if by sea, three if the British are on approach at the Burbank airport"?

Mind you, I bet they're not aware how bad the traffic can be on the 5 that time of day. Even if they take Metrolink and then the Gold Line, we should have ample time to get out the ol' torches and pitchforks before the invasion reaches Pasadena. ;-)

It is fun to see what everyone else's ideas are!!

Tomorrow I'll tell you what the photo is. I did very little alteration.

You all have me laughing! All of you!

The darkness creeping up to swallow the remaining light of our economy.
It's gonna be a long night for our economy.

A peek of a vast underground city, unknown to us before now...

Sorry, Bernie. Coming out of the break room, I collided with my job. Now, where were we...

I remember it ALL now!

This is the sight I had waking up one morning on a Boojum trip in high school.

The headmistress was coming to get me...something about drinking last night...ooof...I don' remember much, but oh my head hurrrrrts! Stoooop with the flashlights!!!

oy, back to my sleeping bag!

I'm entirely Not Zen. I'm married to The Scout, so every time there's a zen photo, I'm trying to figure out where it was taken (rather than having a zen moment).

Clearly, this is an image of the lights on the Colorado Street bridge.

If I'm incorrect, please preserve my easily damaged psyche by deleting this comment.

Okee, everybody, thanks for playing!

Grrlie, you don't really want me to delete your comment, do you? There's no right or wrong. It's just an impression, whatever comes to mind.

I was south of the Jet Propulsion Lab (where else do I ever go?) facing west as the sun went down. These lights shine over the playing field at La Canada Flintridge High School. Without a tripod, my little Olympus is at a loss so this is what I got.