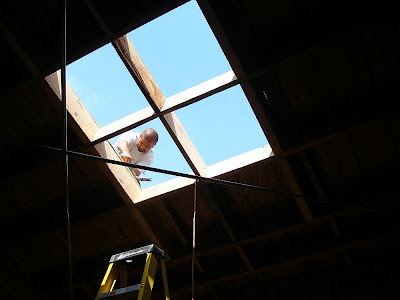 I first photographed this building back in March when it was for sale. It's a simple but pretty structure.

The new owner has set in motion the process of remodeling. I found him there the other day and he allowed me to take photos. He told me it's a bow truss building, which you can see in the photo below (click to enlarge). It was designed in 1947 by architect Kenneth A. Gordon. "The industrial windows, brick facade and character of the building will be maintained as the building is renovated into four private office and retail spaces," he said. The architects are Section F, a New York firm, and DU Architects of Venice, California. It should be all finished by mid August.

I found all that information to be really interesting. I love architecture and construction, even though I don't know much about either subject. Maybe it's because things like flooring go in last, but everything about the building had me looking up. 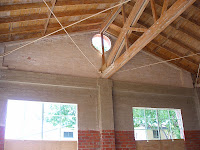 Posted by Petrea Burchard at 8:00 AM

Email ThisBlogThis!Share to TwitterShare to FacebookShare to Pinterest
Labels: architecture

I just checked out the architects link and discovered they built the La Vina hospital. A hospital demolished and replaced by that "gated community" ahem. Seems their association has gone to great trouble in an attempt to cut off public access to the Altadena Crest trail. I may check out the families Altadena home if I should walk in that area tonight.

Like your photo of "the man above." I too admire construction workers (not in the traditional way!) and architecture. I'll be on vacation for two weeks starting tomorrow, so won't be able to visit. (I've used scheduled posting on my blog; hope it works.)

That top shot is great, Petrea! Looks like it's coming on well.

Palm: Oh yes, THAT gated community. Let's go walk there as often as possible, shall we?

Bibi: have a great vacation. I'll check in at Belgrade and make sure it's working.;)

Nice perspective in both shots!

You're so right--it is fun to watch and admire the process and the people who know how to do it.

Funny, the architecture seems similar to one my dad sketched up for a possible treehouse when I was a kid. Obviously though it was too big for the size of the trees in my backyard.

Frankly, I'm glad you did look up. I like the man in the skylight very much ... retaining the ladder detail in the shadows makes this a very compelling photo!

Thank you, Chuck. I'm particularly fond of that detail.