Bungalow in a Box 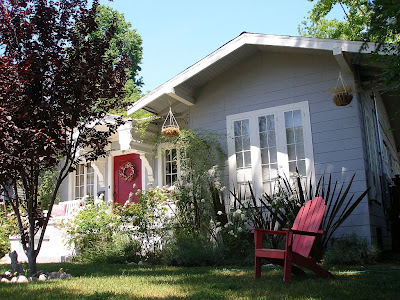 It's legal to take photos from the street, but I feel awkward taking pictures of peoples' homes. I'd feel weird if I saw someone taking a picture of my house. Go to Google Maps, type in your your address and click on "street view," and you'll know what kind of weird I'm talking about. So I was lucky when I found the owner of this house pulling into his driveway, because I wanted a photo of his home and I wanted his permission to take it.

This house, in Pasadena's Bungalow Heaven, is special because it was made from a kit. Kit houses were popular in the 1920s, and Pasadena sports several good examples. (There's one on my block; according to the owner it was ordered from a Sears catalogue.) The one you see here is from Pacific Ready-Cut Homes. It was built in 1924 and first used as a model by the Gregg and Beaman Company, distributor of the kits in Pasadena.

Here's an article by Rosemary Thornton about kit houses. The first picture looks like the house above. Thornton co-authored a book about kit houses with Dale Patrick Wolicki. (You can try Pasadena Public Library, too.)

When ordering your kit, you could choose from among several home styles. The kit came with everything you needed: doors, windows, wood, cabinets— even light fixtures. And instructions, of course.

The homeowner I spoke to yesterday said he'd had his house bolted to the foundation, and he was going to do some work on the roof. Show me a southern California house where that never happens, kit or no kit.
Posted by Petrea Burchard at 8:58 AM

Here, it's very rare to see this kind of house! It must be nice to choose your house in a catalogue!

The house looks really nice, I like the yard also.

We are told our house is a Sears Craftsman kit house, but I havent been able to find one like ours anywhere online.

Unless a house is for sale, I also try not to take pictures without the owner approving...unless its for sale

What a beautiful home - I'm glad he was home to give you permission. Red doors are supposed to be very Feng Shui. I love how the door matches the chair!

How interesting! We have a 2-story modular house that was put together in the factory and then drove up to our foundation in 4 pieces that they assembled in one day! That was really fun to watch our house come down the street. I can't imagine a DIY house kit though!! That would a big project.

I have to say it was really fun to choose our house plan out of a catalogue! (of course, being me, I had to make some revisions!) But it turned out great in the end. We love our house.

This one is beautiful. And nice picture, Petrea!

I can barely put together a flat pack wardrobe, I'd have no chance with a house!

What a lovely home - it sure doesn't look like it came from a kit. I'd like to see the instructions on how to put a house together. Insert window A in slot B?

Jim, the owner told me his wife did the gardening and decorating. I thought she did a great job. There are lots of houses for sale here and some are really special. Maybe I'll take a few shots.

pont girl: the tree, too! It's a purple plum, but I thought it carried the red theme rather nicely.

Christie, the way you describe watching your house arrive--wow. It must have been something else!

Marley, the advertisements said an "average man" could build the house in 30-90 days. Or you could hire their crew to do it for you!

knoxville girl, I can't imagine. Especially the wiring. I don't even want to think about it.

I love these old kit houses! There are a number of Sears homes in a city just north of me that are really interesting! Petrea, I have something for you from the 1920's on my blog today...

My pleasure. Just promise me that if you are in the area, you will let me take you there for lunch. : )

Great looking house and garden; you captured it really well! There were quite a few Sears homes in Indiana where I lived as a kid. I love the idea of having everything arrive in a boxcar. Now all I want is a cute little house like this in the SF Bay Area for $200,000. Waaaaa --- doesn't exist!! Maybe I'll have to move back to Indiana to get one.

Kelly, I love your post about the Little Traveler! Brings back wonderful memories. I'll take you up on that lunch as soon as I can.

Katie, friends of mine just bought a big, beautiful, two-story brick home in Cincinnati for under $200,000. You and I are in the wrong state!

Hi, Petrea! Been working a lot at home lately, so I haven't visited. I love this house. I have a weakness for gray houses with red doors. Lovely! And "kit" houses are becoming very popular, I think.

"Louis" had forgotten about those kit homes and that Sears had once sold them. This post got "Louis" to thinking about how Sears had once been such an important part of our lives and how irrelevant it has become in the last 30 years. When "Louis" first came to California in 1976, he had a new Sears "Die Hard" battery in his car that he had bought just prior to leaving Oklahoma for the move to the San Francisco Bay area. Shortly after arriving in the Bay area, the "Die Hard" died. He took the car, the battery and the receipt to a Sears store. Even with the receipt, they gave "Louis" such a bad time about replacing the battery that "Louis" swore hell would freeze over before "Louis" ever spent another nickel in a Sears store. That was in 1976, Hell hasn't frozen and "Louis" still has that nickel....

I agree, Bibi. I was pleased when I found the house and it was in such charming condition.

Louis, I remember as a kid how we scanned the Sears catalogue for what we hoped Santa would bring. Time is consistent about one thing, and that is change.

I am often inhibited from taking a photo out of respect for privacy. But I have to admit, I'm a bit more liberal when I'm holding a video camera for some reason. ??? This is why I have lots of footage of people yelling at me to "Turn it off!"

Petrea, beautiful photo of a bungallow. I love all the history around it. It all sounded so simple then. Find a kit you like and have it built. Love it!