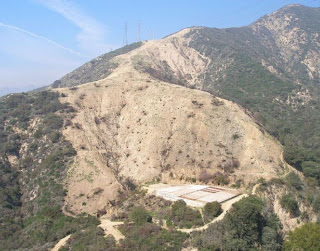 My March 11th photo of North Lake Avenue showed a patch of hillside that was burned in a brush fire last August. That patch remained bare throughout the winter.

To get a different look at the burn, you don't have to go far up the Sam Merrill Trail before you face the area head-on across the canyon. The picture to the left was taken February 18th (not a good day for breathing). I took the picture below about a month later, March 17th. No doctoring, no Photoshop.

Click on the photos to enlarge them and you 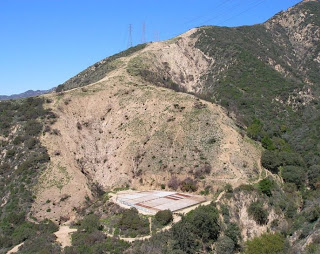 can clearly see the difference between the two: we had rain. Things grew, and they didn't waste
any time doing it.

Rain could have meant mudslides in the burned area, where no plants had survived to hold onto the dirt and keep it there. The hillside could have come down onto that I-don't-know-what-you-call-it part of Pasadena's water-catching and -treating system you see at the bottom center.

But the hill held up and the brush is growing again. It won't be bright green for long, but that doesn't mean it's not healthy. Around here it's all scrub, chaparral and sage brush. By summer, the muted brown, gray and sage palette will dress the hills. Maybe that bare patch won't look so naked then.
Posted by Petrea Burchard at 8:44 AM

I suppose it would be nice if somehow grass or something would grow there to hold back the soil from washing away in a rain storm.

Have a good week.

Nice comparison photos. I posted a backlink on Stonehill News.

We live just at the top of lake, and we discovered the trails when we moved in 4 months ago, I see this patch each time we hike up...lovely hike, and lovely area!

Ah, the verdant wonder of our Southern California hills in March (he says not entirely with sarcasm). And then when the mustard blooms the hills look so velvety soft that they almost invite us to roll down their flanks squealing with childish glee. But, as you say Petrea, soon enough they will be back to their brown and scratchy selves.

Rats. And I was just explaining dangling participles to someone recently. Make that: "...they almost invite us to roll down their flanks while we squeal with childish glee." But then again, if the hills are ticklish...

i hardly imagine you've been there, small town ohio is not a popular destination for many! thanks though! very cool pictures, now i can keep up on what's in CA as well as paris :)

Hi Abraham: You may have heard of fires in Malibu, followed by rain and mudslides. Those are the conditions we get here. So we're happy when the growth comes in, preventing those slides. It can be more than erosion; it can be loss of homes and lives.

Jeremiah: Thanks for the link! Much appreciated.

Stef: I used to live up there and walk the trail almost every day. I'm a little jealous(!) Let me know if you've sketched anything I photograph, so I can link to you. I've already linked to William Wray (see 3/14/08).

Tall Gary: Why did I think you lived in Europe? It's your erudition. I have a Rhetoric B.A., but I wouldn't have noticed those squealing hillocks.

Claire: I recognized the Midwest in there, though!

I like the comparison. Maybe you will get lucky this year and it stay green a bit longer than normal.

Bonsoir, Petrea! So from Paris to Appleton to Pasadena to the SF Bay Area! We get around, n'est-ce-pas?

We can blame it on Eric and Tomate Farcie! (Actually, Tomate Farcie should be first on that list - Louis was sitting with his lap Mac in an espresso shop in Oakland before repotting himself to la belle France. Tomate Farcie was sitting next to Louis with her Help-Bill-Gates-Get-Richer laptop. A blog discussion ensued, and "The Frog Blog" was born right there, the day before Louis left for Paris. It was via Tomate Farcie that Louis discovered Paris Daily Photo......

Oh, Jim, that would be nice. But the desert has its beauties, green and otherwise.

Louis la Vache: I had no idea you and Tomate had such history. Well, I discovered Paris Daily Photo on my own, but it was via that very blog that I discovered Tomate Farcie and Louis la Vache, so yes, we do get around!

This happens all the time in Turkey! Especially in our Mediterranean region. It is very sad to see a beautiful place burn down like this.
Seda
Istanbul Photo

Petrea -Louis is always happy to see you, no matter where! :-)

OK, I will Petrea. William is so talented, I love his work.
I'm sketching vehicles at the moment all around Altadena, since I arrived in America, I always wanted to do this long skecthbbok with only weird American cars, trucks... when I was a kid in France I was in love with American cars, the old stuff, so now that I'm here, I'm so excited everyday to see vintage chevrolet, cadillac...

Seda: Happens all the time here, too. It's a fact of our climate. This was a lucky one, though.

Stef: Another fact of our climate--vintage cars remain well-preserved.