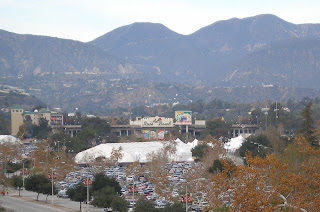 Welcome to Pasadena Daily Photo! Of all days, it's most fitting to start on New Year's Day. Pasadena's calm enough throughout the year, but this town throws a new year's party like nobody else, with the colorful Tournament of Roses Parade and the Rose Bowl football game.

I admit I'm not a fan of crowds, so even though U of I is my alma mater I didn't go to the game today. This photo was taken during the game, looking north from the Holly Street bridge. It gives you an idea of the size of the mob I missed spending my afternoon with. More cars were parked on the golf course north of the stadium, and on front lawns of enterprising citizens living in the surrounding neighborhoods. Nearly every parking lot in town is full, if not with RVs, then with Rose Parade floats. (Click on the photo to enlarge it.)
Posted by Petrea Burchard at 6:46 PM

What a great shot! I once knew somebody who tried to get a similar shot of the mayhem at the Rose Bowl, but the traffic was too wild. Happy New Year!

What a great idea! is there no end to your talents?!

Thank you! If I get a comment on this post every two years, that would be a hoot.