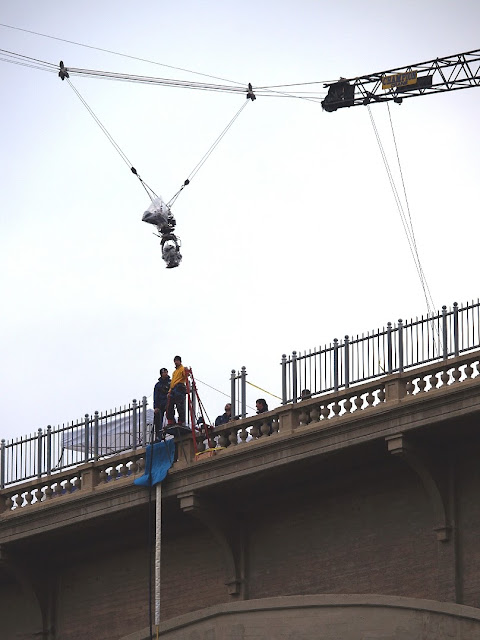 I wish I could say I took this photo, but alas, I did not. It was taken by David Thomson of Sun Valley, who emailed it to me today along with this message:

"Attached telephoto I took of a movie crew working on top of the Colorado Street bridge yesterday, so the bridge was closed. I think they've been there for several days now. They removed sections of the fence to set up their shot. The fellow in the yellow jacket may be an actor or stunt man being photographed by the camera suspended overhead by 2 cranes - one on the bridge and the other below. All the harnesses etc. that have him strapped "safely" in place could be removed in "CGI" - post production digital work - if they want him in the shot. They were making lots of takes with just the camera being lowered into the Arroyo and back again...I assumed the camera was supposed to be seeing the point of view of someone jumping off the bridge."

David's an award-winning photographer and a member of the Cinematographer's Guild. He knows what he's talking about. Honestly, when I drove by I thought it was just construction.

David went on to say that a woman he spoke to said she thought the shot was for a Jim Carrey movie. In the Lower Arroyo Park today I spoke to a security guard protecting the film equipment. Indeed, the stunt (which the guard said isn't finished yet because of rain) is for Carrey's upcoming film, "Yes Man."
Posted by Petrea Burchard at 8:31 PM

very cool shot! I'm going to have to wander over there and check it out. I added a link to your blog as well. Thanks for the add!

How fascinating, and we saw it here first! God i don't think i could do that to save my life. Looks scary doesn't it. Could i do it to meet Jim Carrey...? Hmmm..may..be....

Ben: wait 'til the rain's over. The cranes were gone yesterday.

Lynn: Maybe we could both do it to meet Eric, eh?

I agree with Lynn...scary. But I bet it comes out a great shot. The closed the entire bridge? Do production companies (?) have to pay to have that done?

Welcome, Corey. From Portland, Maine! Lovely place, through your eyes.

Jim: Production companies probably pay a handsome fee for such a location, though I don't have the figures. We're a short hop from Hollywood and many of us work there. A lot of production happens in the Pasadena area because of its pretty locations, so I imagine the city has good relations with the studios.

In the L.A. area this type of thing happens quite a bit. Films are big business here, so the metro area is happy to accommodate. It's good for the economy.

I saw that as well, I think it was Saturday. My kids and I hiked down beneath the bridge. We saw that camera run upm and down several times too. We also got to see a guy do a bungee jump. You can see the cord hanging from the bridge there by the camera in the photo.

We were told it was a Jim Carey shoot as well.

That's a bungee cord below the fella standing on the platform. I was there with my kids and we watched someone jump. We were told it was a Jim Carey shoot as well.

Hi Anon, Hi Brian:
The photo was taken January 22nd by Dave Thomson. But I saw the crew back on the bridge today. They're going to get that stunt no matter what! I was on the freeway and couldn't stop to take a picture, so I hope they're there again tomorrow.

I was there today, walking around and hoping to take some pictures of the bridge. Just so happened that the filming was going on, so I snapped a few pictures as the Jim Carrey stunt double (I think) jumped off the bridge. I posted them here:

Oops, the link was too long. Try this.

Hey Mike, thanks for linking up.

Your zoom of the jumper looks suspiciously like Carrey himself. The security guard I spoke to said Carrey had wanted to do the stunt. Looks to me like he did it. (Which I think is crazy when professionals all over town are trained to do it. But when you're a star you get to bungee jump off the Colorado Street Bridge if you want to, and I'm thinkin' Mr. Carrey boosts his macho with this one.)

Well done! I also like what you've done with the template of this blog!