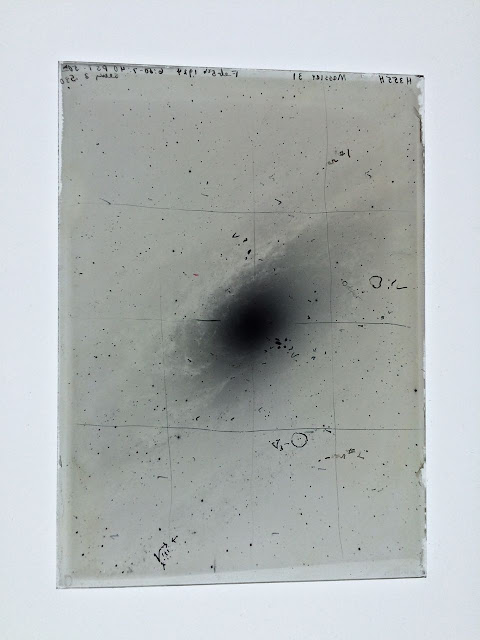 Today we know this as the Andromeda galaxy, or M31. But it was known as the Andromeda nebula when this negative was taken. Edwin Hubble crossed out the "n" (which meant nova) and wrote "VAR!" in bright red, indicating he had found a variable star in the Andromeda nebula. "That first discovery of a variable star meant he could measure distance to Andromeda and show that it was in fact very, very far away and not part of our Milky Way at all," says Dr. Cindy Hunt, Caltech PhD and head of Social Media for the Carnegie Observatories. This unique plate shows Hubble's search for more variable stars in Andromeda, and you can even see "V4!!!" in Hubble's handwriting.

Even though we visited the one building in Pasadena (designed by Myron Hunt), The Carnegie Observatories is plural because it's several different observatories supported by private donations and endowments. For the last couple of posts we've been talking about the Carnegie Observatories' archive of glass plates: "astrophoto" negatives of space taken in the latter 19th and early 20th centuries. 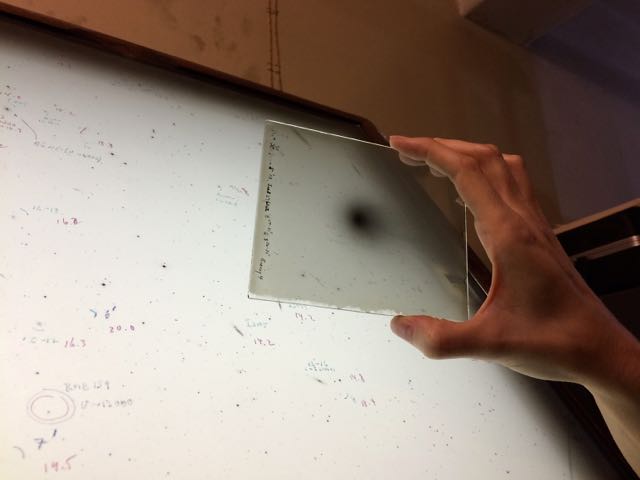 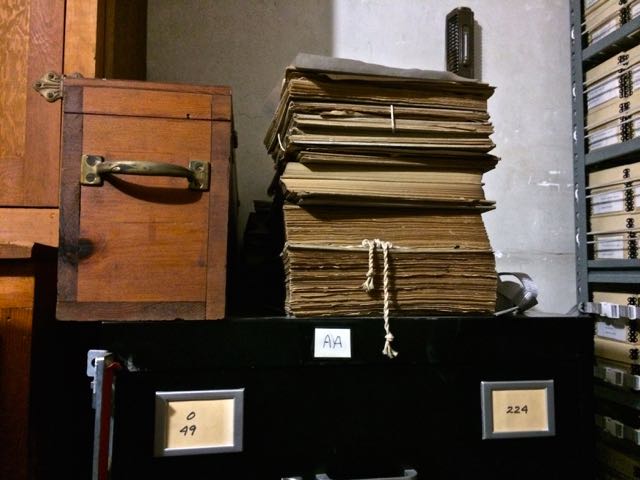 I love the wooden boxes. Each is unique. But Dr. Hunt knows where everything is. 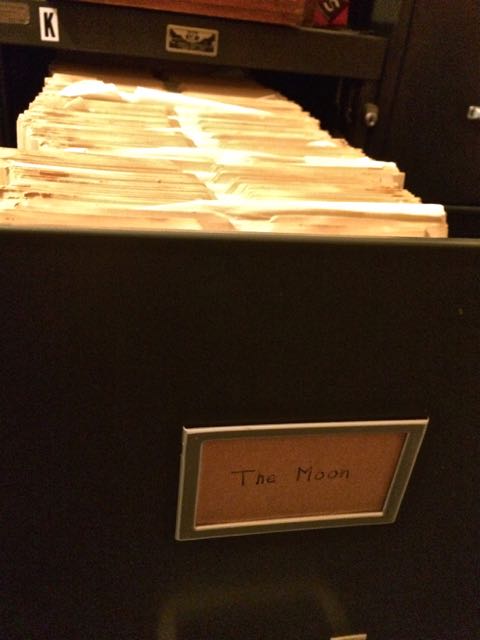 Not a great photo, but I like it. The Moon in a hand-labeled filing cabinet continues the theme of "a hundred years of boggling the mind." 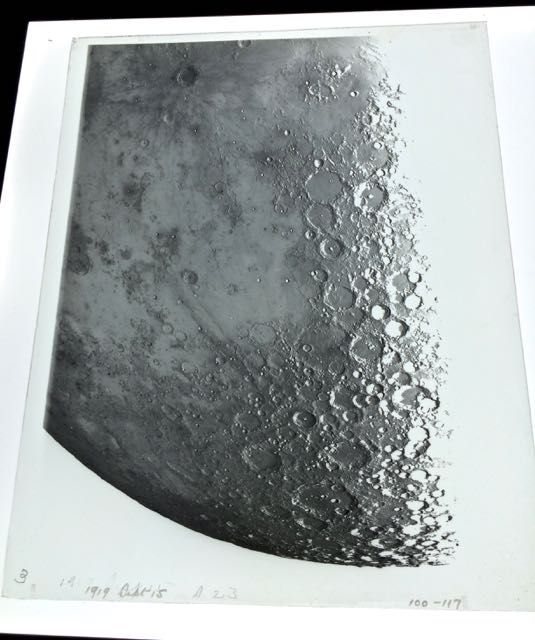 This developed negative of the moon is from 1919. Think of how brand new it all was then. It's been nearly a hundred years. Have you seen the latest images from Pluto? 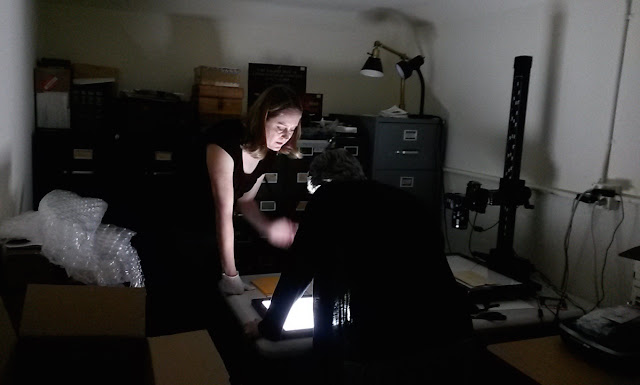 Cindy shows me glass plates. We looked at the moon, the sun, comets, galaxies, you name it. 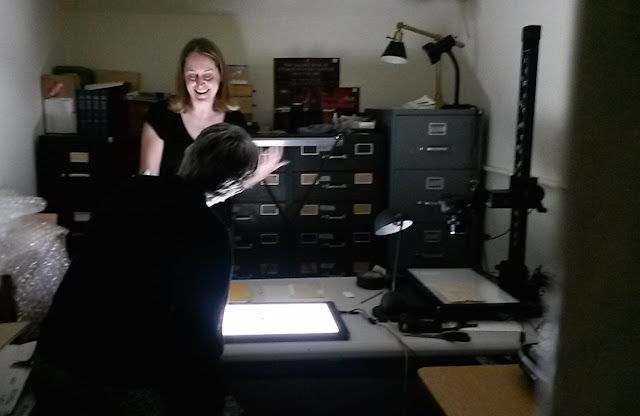 I think she likes her job.

Cindy showed us a lot, but there was one thing she couldn't show us. 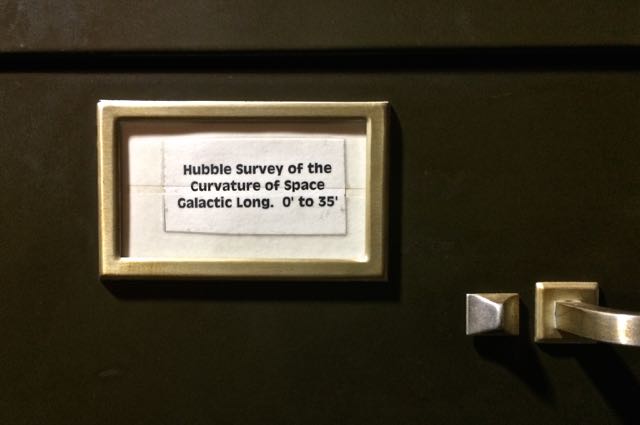 The original plate, the one Edwin Hubble took when he knew he'd discovered the expansion of the universe, is not kept here. It's too valuable. What we saw was a fine replica.

You can see many of these glass plates, and other exciting space stuff old and new, at the Carnegie Observatories Open House on Sunday, October 18th 2-5 pm. Be sure to RSVP! It's a family-friendly event. Check out one of Pasadena's little secrets.

Hubble must have been excited!

I have seen some of the latest imagery beamed back from Pluto. At this point, they should just do the right thing and give it back its full planetary status instead of the dwarf status.

"The Moon" filing cabinet? How brilliant you are to pick that out.

I wish that was true, but Cindy was the brilliant one who picked it out.

I know! These people were wonderful photographers.

Thanks! I think so, too!

Is the original plate at the Smithsonian? I remember Richard poring over glass plates like that. Now it's all digital with the instruments recording spectra. Hubble's find was truly mind-boggling. Imagine thinking the Universe was only the Milky Way, and suddenly realizing there were other galaxies beyond it? I wonder how long it took for other astronomers to accept it?

I don't know where the original plate is. I assumed it was elsewhere in the Hunt building, but I don't think Cindy told us the location. The Huntington houses some Carnegie papers, but if I understood Cindy correctly it's only papers, not objects.

Because astronomers are physicists with a heightened sense of wonder, I imagine they were skeptical of Hubble's findings at first, but they couldn't fight his math. What a thrilling discovery. We talk about it now like it's no big deal, but I still can't wrap my mind around the enormity.

How fascinating! I love the Moon filing cabinet - and the photos.
Trying to expand my mind to think about the universe....