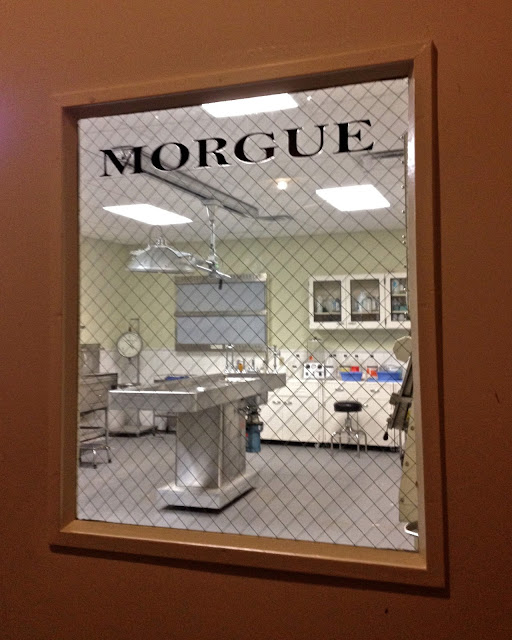 The other day I promised I'd show you parts of Mountain View Cemetery and Mausoleum that most people don't see. Here's one of those parts. 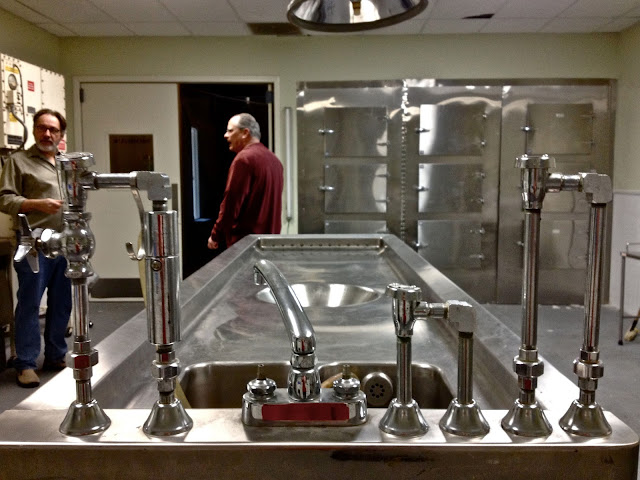 John Sandel and Jay Brown in the "morgue"

More people get a gander at this room than you might think, though, because it's a film set. Though the room is not a real morgue, the equipment is eerily real. The "drawers" at the end of the room can accommodate equipment, crew members and actors ("bodies"). One of the doors is actually a full-sized entry/exit disguised as morgue drawers.

Pasadena doesn't make it easy for film crews to shoot here. Fees are expensive and permits are hard to get. Altadena, where the cemetery is located, is part of unincorporated Los Angeles County and more welcoming to film crews.

According to Jay Brown, owner of Mountain View Cemetery and Mausoleum, a good deal of filming goes on at the property. And Jay is happy to welcome the film business. With free parking, versatile spaces and gorgeous views, it's a no-brainer. You can visit, too, between 9am and 4pm. But unless you're on a film crew, you're probably not going to see the "morgue."
Posted by Petrea Burchard at 12:01 AM

In college I took a part time job at the local hospital and on a slow Saturday several of us were invited to tour the morgue by the pathologist. I declined being a bit squeamish. Now I see what I missed. Good to know I made the right decision back then.

I have never seen the inner workings either... (not to put a downer on this but) I have been to the one off of Mission Bl. the L.A.County one and let me tell u it was quite a lesson.. the building is quite old which only enhances the awful feelings one has already...(if you're interested email me and i can tell u)

Interesting how they make it look so real. Gotta love Hollywwod!

It looks real because it is real. It's just not used for the purpose. But they use the same equipment on a TV morgue, do they not? We don't have any trouble looking at those, perhaps because we know we're watching fiction.

Well, I never imagined this would be there. What a great sideline for a cemetery, so LA. Does Forest Lawn have a fake morgue also, I wonder?

Maybe someone out there knows, Bellis. I don't know about that one.

Dina, you make me laugh.

So interesting (and a nice capture of a morgue, a phrase I never thought I'd type) - would you know anything about why Pasadena doesn't make it as easy for folks to film there?

I so want one of those big steel wash-down things. It would look great in my kitchen and so practical, too.

Thanks for clearing that up. I thought John dropped by for a nip and tuck.

What a fascinating place to film! Having the entry/exit hidden behind drawers is a nice touch. I'm not sure I'd want to spend a lot of time here though. But I just read about a morgue in Tasmania being turned into a hotel; I definitely would NOT want to stay overnight there!

What—Katie, I'm surprised. Folks are dying to go there.

I'll have to keep an eye out to see if I catch this on TV. A lot of the shows I watch are filmed in Vancouver, but Monk was filmed in LA--wonder if they used this set.

The LA County Coroner's office guves tours, I belive, and they have a gift store just like a museum. You also shop online. It's called "Skeletons in the Closet", and I doubt that any coroner's office anywhere has more of them.

I don't know the answer, Lulu. It could be the city doesn't want crews on the streets. But every producer I've ever spoken to has talked about how difficult it is to film here.

There must be a catalogue, Dive.

I didn't get any creepy feelings, Katie, partly because Jay Brown is a nice guy, and a pro. But there are parts of the place where I wouldn't want to spend a night alone.

That's a great link, Laura. I hope Dive sees it.

Remember the TV show "Quincy"? I wonder if any of it was filmed here?
This would be a good setting for a horror movie, so sterile, shiny, and cold.

I think this set was built later, Ms. M, so probably not used on "Quincy." But keep your eyes open on current shows and movies.