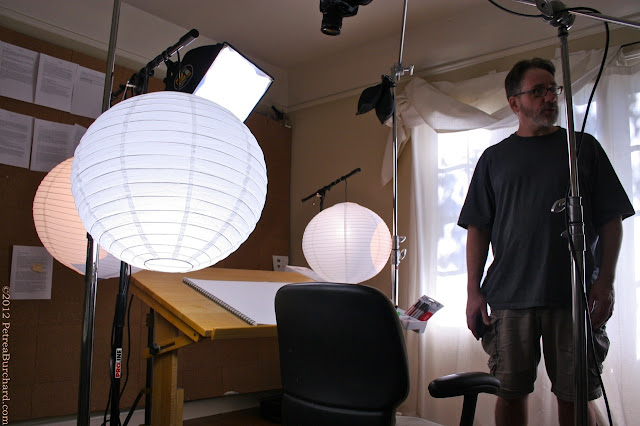 Lately my multi-talented husband's been doing some drawing work (animation, logo design) and yesterday he had an on-camera job. No, he's not launching an acting career. John's arm and hand were filmed at high speed while he drew, to be pixilated in a web video for a new website.

For one day, John's home office became both animation studio and filming location. This would have been claustrophobic for a big crew, but there was enough room for both set and crew because the cinematographer, lighting designer and post-production supervisor are all one person named Denny Kukahiko. 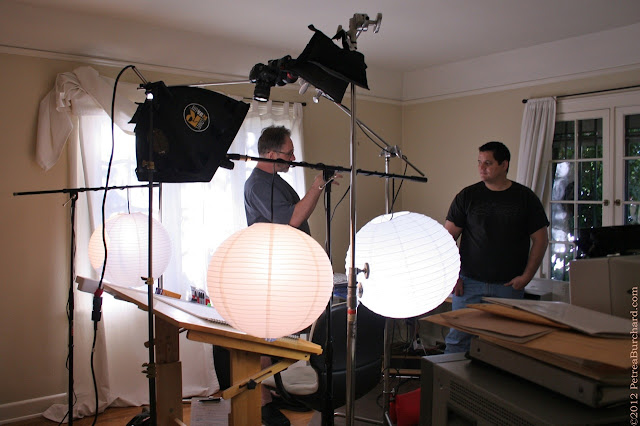 I took this shot of John and Denny before they started shooting. You can see the camera suspended above the drawing table. The lamps are called China Balls. I know they resemble what my parents had in their dining room when I was in high school but these are slightly different and they give a sugary, diffuse light.

There wasn't quite enough room on the set for producer Kendall Kanoa Hawley, who set up her laptop in the dining room. Kendall, Denny and Denny's brother Chad Kukahiko make up Superfreako Productions (rhymes with Kukahiko, see?). You met them here when I told you about their short film, Carefully Descending. John met them through his participation in the Hollywood film collective, We Make Movies. John's got more projects coming up with WMM, so I'll have more to tell you soon.

Amazing to see what's needed to do even a small video shoot (and to hear more about John's work). I'm sure the finished video will be really cool. (I hope you'll be able to share it with us.) Thanks for a peek behind the scenes!

Katie, I'll be able to share it if John's happy with the final product! I hope so. It was funny having the small shoot here yesterday. (A large shoot in your house is not fun.)

Ha! And he wasn't even the director.

Having movie shoots in your house must be very exciting. Did John have a hand double and make-up girl? Where did the wardrobe truck park? Did they provide a table full of food and drink for the crew? Were there security guards and police that get paid to hang out for the day?

By the way, I still have lamps like those China Balls in my house, and I'm not old enough to be your mother.

John and I shot a short film in the house we rented in Altadena when we first got married. There was a crew of four or five and a cast of four or five, plus lots more equipment. I don't recommend it.

Bellis, let me see if I can answer all your questions:
John's left hand doubled for his right;
he went without make-up (very bold);
wardrobe came from a drawer in the bedroom;
we fixed lunch for Denny but Kendall came later and brought her own;
the security guard was allowed to lie in the sun on the front porch after the mailman came.

Yes, I too vote for seeing the final product. Stroheim, I hear, was a perfectionist. Insisted on using actual caviar-for authenticity.

Heh heh! I think the security guard had the best idea!

Jodhpurs for John in second image- based on Karin's comment. Love the contrasts of lighting sources. Easy to wax philosophical.

I can't wait to hear how he'll respond to the comments. I can't picture him in jodhpurs, though

They look like the lights you can buy at IKEA. Hmm... this is giving me an idea.

See, this is the danger with the innernet—it gives people like Vanda ideas.

I thought Vanda already had ideas but I guess that was just an idea I had.

Is there no end to John's talent?! It all sounds very cool. And I love the look of those China Balls ~ they diffuse the light beautifully.

I'm biased, of course, Shell, but I think not. I mean, about the talent. No end. I agree about the light.

Very interesting. I hope you post the final results. About 15 years ago I rented out my lunchroom to a film crew that was shooting a 30 second commercial for a super market chain. Ten people worked for over 15 hours to make that 30 second commercial.

Wow, you have a lunchroom?

It does sound grand.

Fascinating! And I'll be very interested in hearing more about the video and John's work!
And I'm glad the security guard kept such a good eye on things from his vantage on the porch :)

That is so cool! Was there a lot of "hurry up and wait" like there is on big productions?

Having seen "Carefully Descending," I'm betting John will be happy with the final product. Looking forward to seeing it.

Thanks, Ms. M. I'm happy to see John branching out with his drawing. He's really good. Recently he did storyboards and backgrounds for animatics. Next is a logo, I think a mascot for a t-shirt.

I wasn't here much during the day but I don't think the "hurry up and wait" factor came into this shoot, Susan! And you're right about "Carefully Descending." I believe they had more than one cinematographer but Denny was one, and a producer, too.

Petrea & John, thanks for the post, the use of your house, the wonderful lunch, the great illustrating and the behind the scenes pictures. I totally poached them for the blog that I am forced to write. I also love the comments from your friends. If you are interested in the technical aspect of the shoot, here is the url for my blog. I hope, but doubt that you will enjoy it.

That's great Denny, thank you. I just tweeted it.

A teacher friend of mine up north, put this on his face book page. It's making the rounds

That's interesting, PA. I wonder if he knows the Kukahikos or something. Or maybe he knows John. The world gets teenier.