There's art all over Lincoln Heights. Here's some of it. 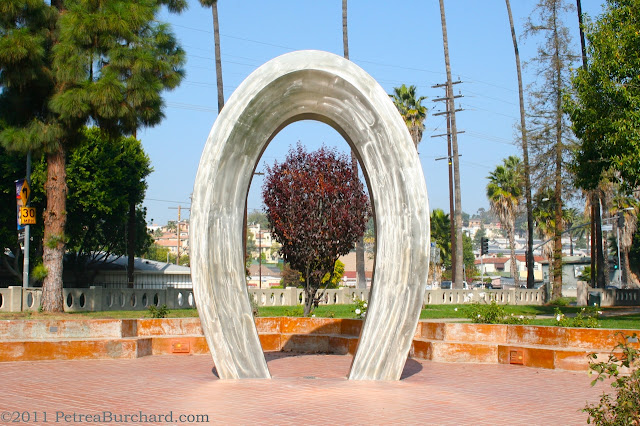 We talked about Lincoln Park yesterday in the comments. I like this piece a lot, and not just because you can frame a tree with it. I like how the neighborhood rises beyond it, like its reason for being there.

If you turn around you see it's part of a larger artwork, The Wall las Memorias, the first publicly funded AIDS monument in the nation. 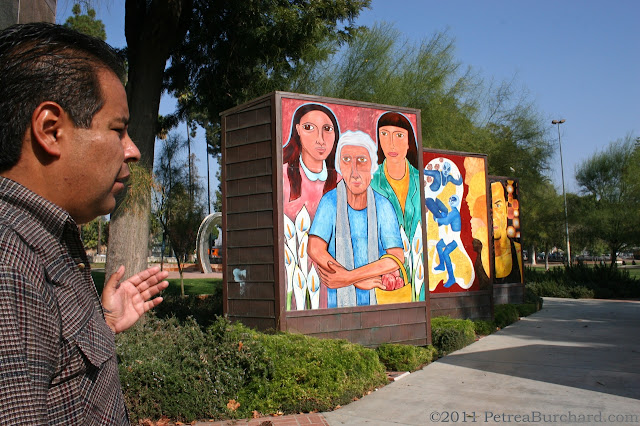 Roberta (Latino Heritage) mentioned this yesterday in the comments. You can see the horseshoe peeking out from behind it. It's actually not a horseshoe, but a design based on the AIDS awareness ribbon. 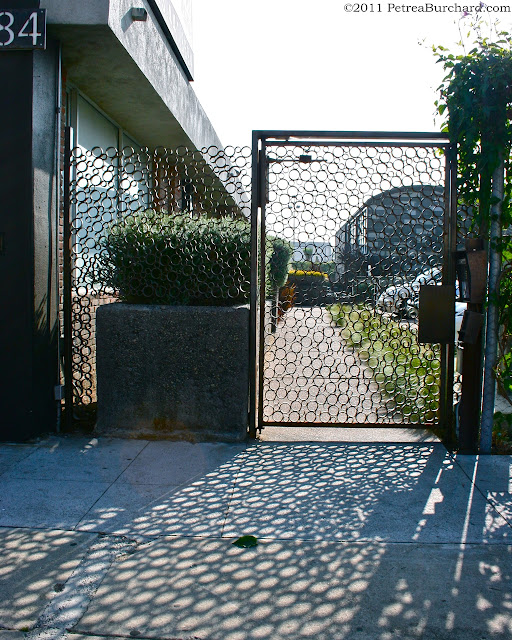 I don't know, do you call this art or architecture? Good architecture is art, after all. Maybe I should have put this in the architecture post from the other day. I like it a lot. 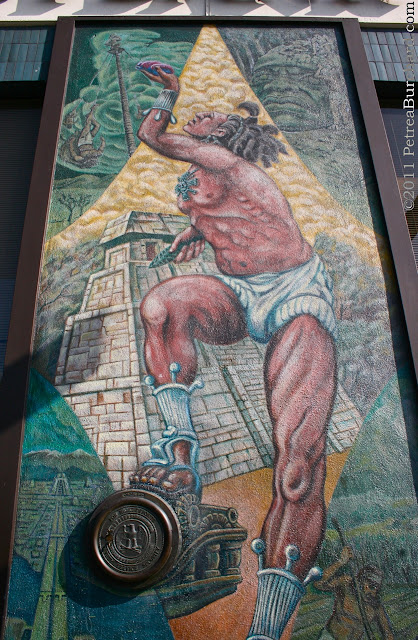 This mural has several panels. Karin posted another part, where the artists included pictures of themselves painting the mural. The whole thing is witty that way. I love how in this panel the artists incorporated the night deposit box as our hero's footrest. 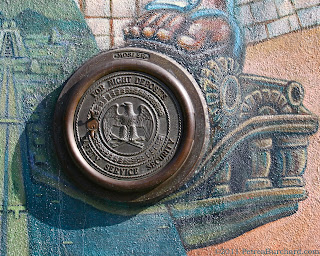 I took a picture of the artist's signatures or I'd never remember that the mural was done in 1977 by Los Dos Streetscapers, David Botello and Wayne Healy, and renovated in 2006 by Paul Botello.
Posted by Petrea Burchard at 12:01 AM 15 comments: 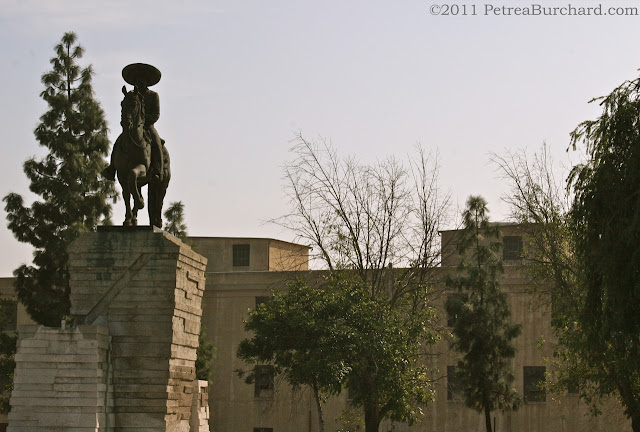 This statue of Emiliano Zapata Salazar, aka Zapata, was a gift from Mexico City to the City of Los Angeles in 1980. It stands at El Parque de Mexico. You'll find several sculptures of Mexican heroes there, though we noted some busts were missing and I'm not sure why. 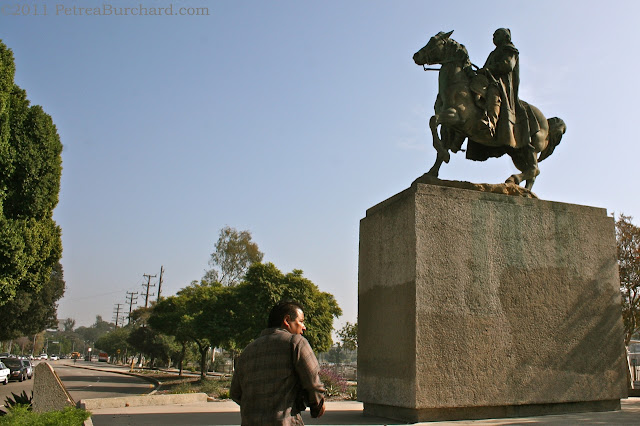 This statue of Jose Maria Morelos y Pavon was donated to the City of Los Angeles by Mexican President Jose Lopez Portillo in 1981. (Sorry, there should be accents on Portillo's names but they freak Blogger out when I use them, which makes no sense to me because don't people all over the world use Blogger?)

My photo doesn't do justice to the statue (or to Manny, for that matter). The statue is detailed, powerful, impressive. You've got to see it in person. 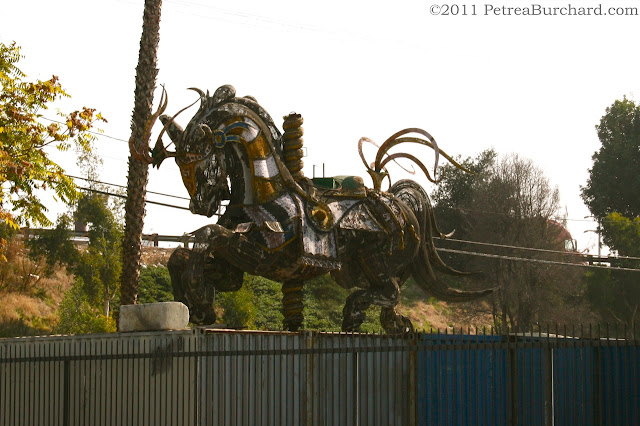 Just for fun, a caballo without a caballero. Caballo Diablo, perhaps. This exuberant work prances at the Brewery Arts Complex in Lincoln Heights.

Tomorrow, more art.
Posted by Petrea Burchard at 12:01 AM 15 comments: 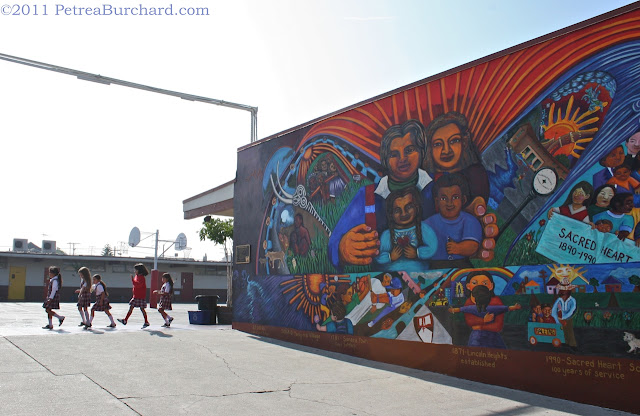 While in Lincoln Heights we stopped at Sacred Heart Church (est. 1897) for a few minutes and listened to the high school kids sing. The church was packed. It was noon-ish on a Wednesday. It was hard not to be charmed.

Sacred Heart School is across from the church. Karin tells the story of the mural here. It's about family and community, lives long and short and intertwined.

Manny estimates Lincoln Heights to be about 70% Hispanic (mostly of Mexican heritage), 20% Asian and 10% "everything else." Surely I'm generalizing, but 70% Hispanic/mostly Mexican is likely to mean a lot of Catholics. Many of the markets in Lincoln Heights (except the Asian ones) have a representation of Our Lady of Guadalupe painted on the exterior. Always a lot of color; always Our Lady. 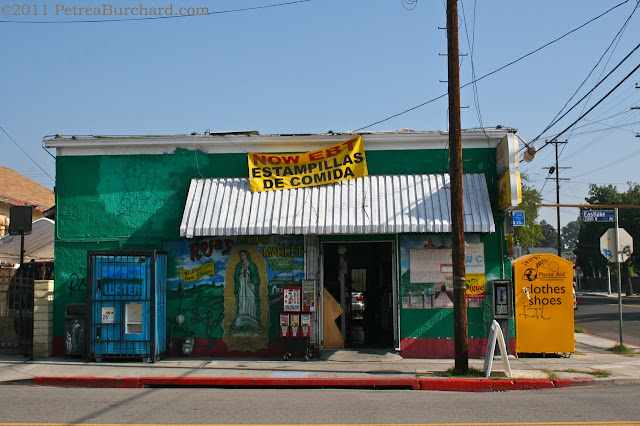 PLUS I CAN'T BELIEVE I FORGOT to include this in yesterday's post about Lincoln Heights architecture! 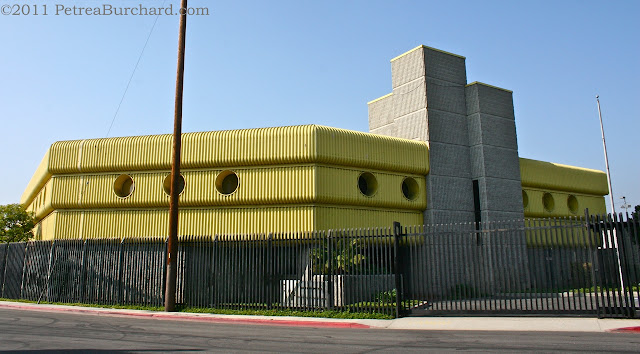 I haven't forgotten it's Thanksgiving, no indeed. I'm thankful every day for too many things to mention. Really, you don't want me to start. Once I get started I think of more and I can't stop.

So I'll just say here and in keeping with this post that I'm thankful for the diversity in our world and our nation, not to mention in Los Angeles and Pasadena and especially in my neighborhood of Northwest Pasadena. What a great place to live.

Happy Thanksgiving! May you have many blessings to count.
Posted by Petrea Burchard at 12:01 AM 25 comments: 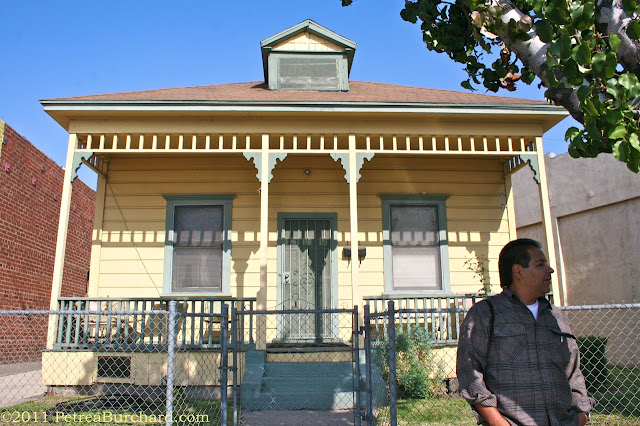 Here's my shot of Manny. This little house is next door to a convenience store where we stopped for refreshments and a break.

I can't begin to show you all the architecture of Lincoln Heights in one post. It's vastly diverse and there's a lot of change going on according to Manny. A lot of gentrification. One really great project you might want to look at is the Brewery Arts Complex. 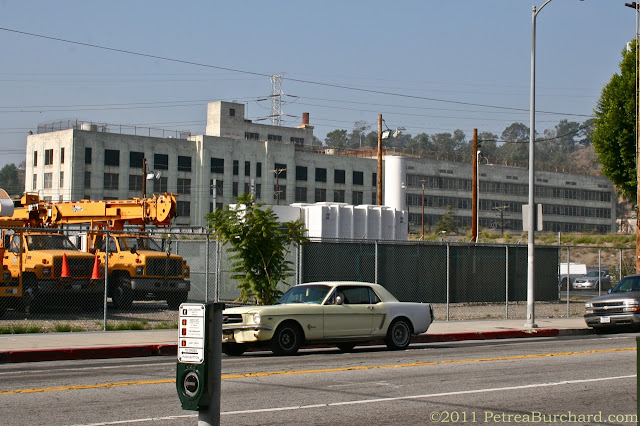 This was the original LA jail. *(update: I'm incorrect on that. See dbdubya's comments; he's a LAPD veteran and has a lifetime of knowledge of all things LAPD.) Manny says there are plans in the works to use it as some kind of housing. I don't know about you but I love this type of industrial architecture. There's something so Brazil about it, don't ask me why. 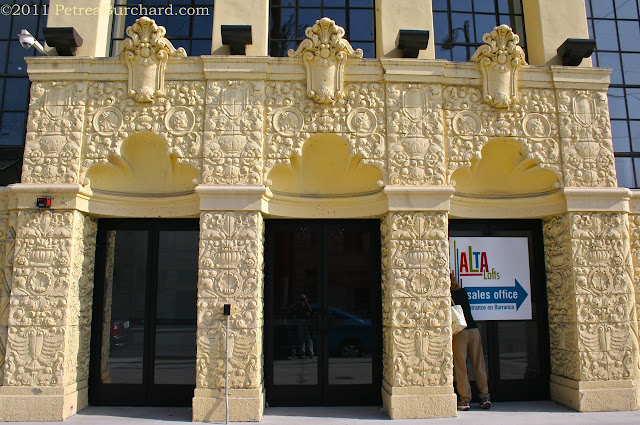 That's Bellis in the door at right (and me in the middle). The street was too busy for me to step out and get you the whole building... 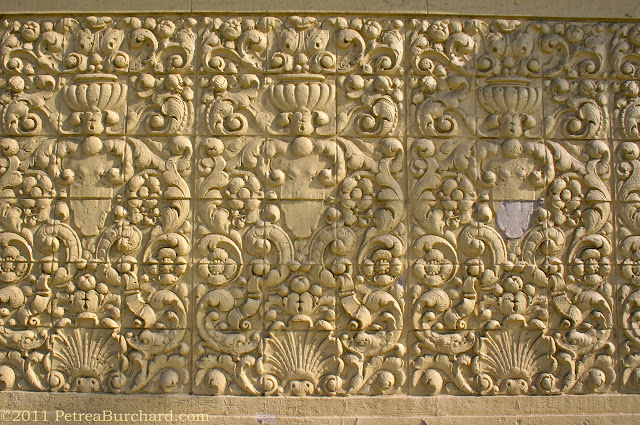 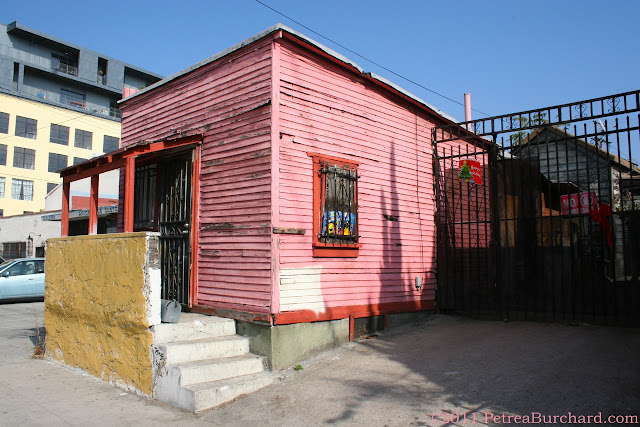 And then, just around the corner, this little place. I got the impression there were once several like it along here but businesses have swallowed them up. There's a lot of manufacturing in the area. This was down near San Fernando Road and Barranca Street. 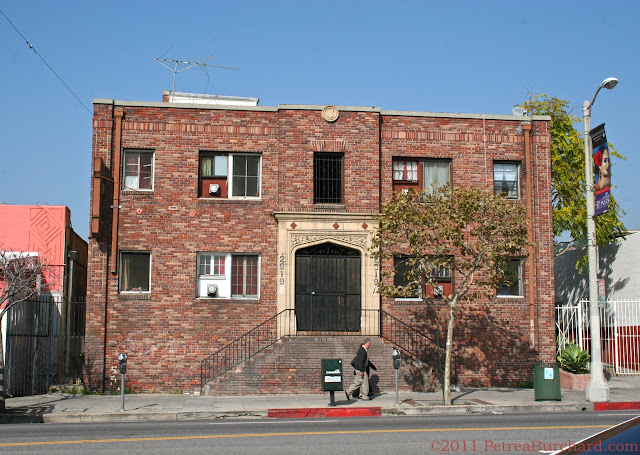 Now, this is up on Broadway (I'm tellin' you, we covered some ground!). I like this building. Brick buildings aren't the norm in Los Angeles. We have a few in Pasadena, but not many. I'm told it's because of earthquakes and I'll bet it's also because we have mild winters. Bricks are apparently winter material. This building reminds me of Chicago. 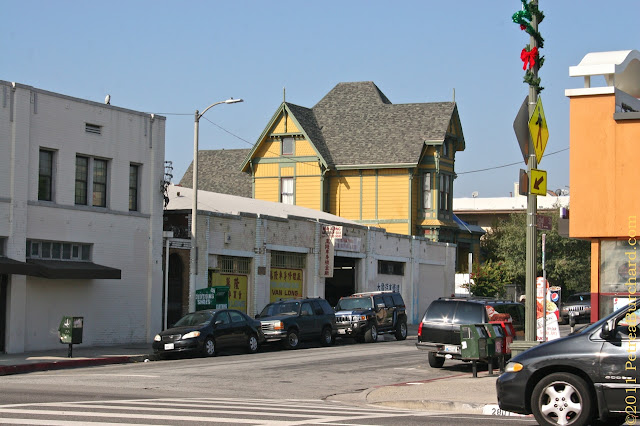 In a way, this photo exemplifies Lincoln Heights. Talk about juxtapositions: a glamorous old Victorian, plunked down in the middle of all these commercial buildings. Manny says a lot of gentrification happens in the neighborhood when folks with money buy these homes to live in them and fix them up. It can be a good thing: the neighborhood gets new people (with means) who care what happens there. 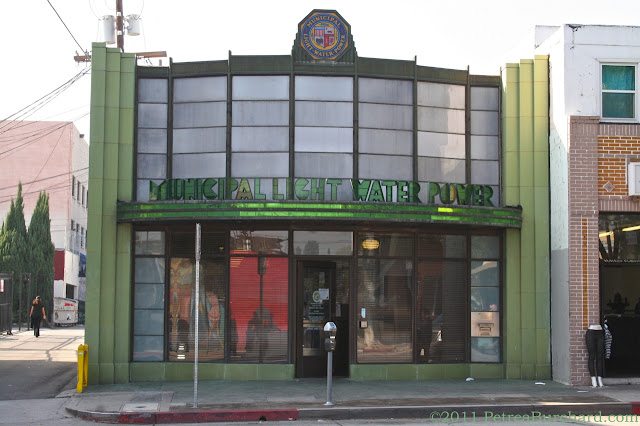 We saw this jewel as we hightailed it toward the train station. I was tired by then and I don't know what direction we were going or what street we were on. But damn. I mean--damn. Who's going to make a building like this today? 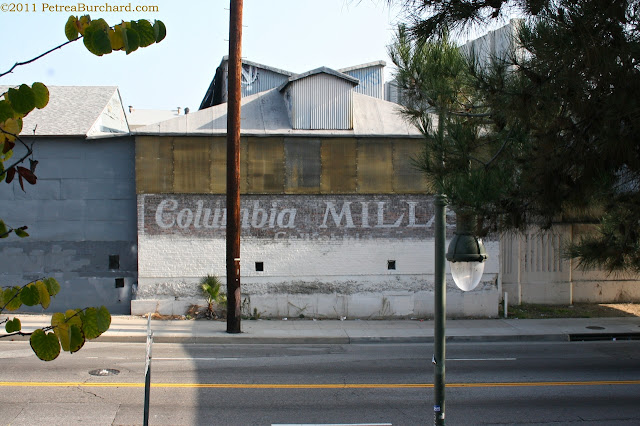 We knew by the view from the train platform that we were in for something interesting. 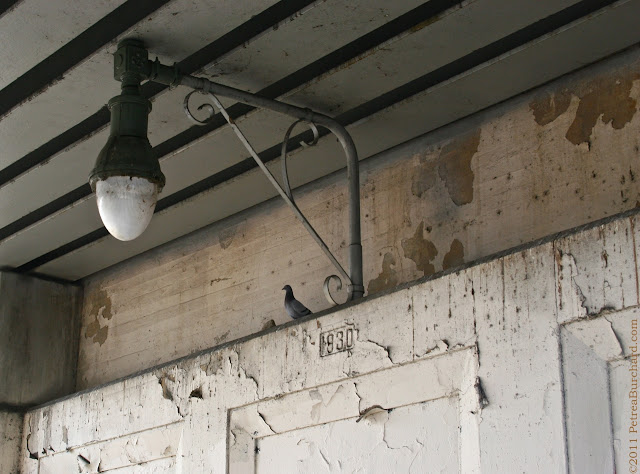 Not to mention the view underneath the tracks.

You'll forgive me, I hope, for taking us on a detour a mere 15 minutes southwest of South Pasadena on the Gold Line.

As I mentioned Sunday, Karin, Bellis and I had the good fortune to be squired around Lincoln Heights by neighborhood booster, family man, professional, host and fine storyteller Manny Rodriguez. Read Karin's tale of our trek here. Karin's another fine storyteller and I don't need to tell it too, at least not in so many words.What I'd like to do for the rest of the week is tell the Lincoln Heights story the way I saw it in pictures, through its architecture, art, views and juxtapositions. There are many juxtapositions.

Los Angeles is made up of countless worlds and as long as they have history and people, I'll bet they're all as interesting as Lincoln Heights. It helps, though, to have a guide like Manny. 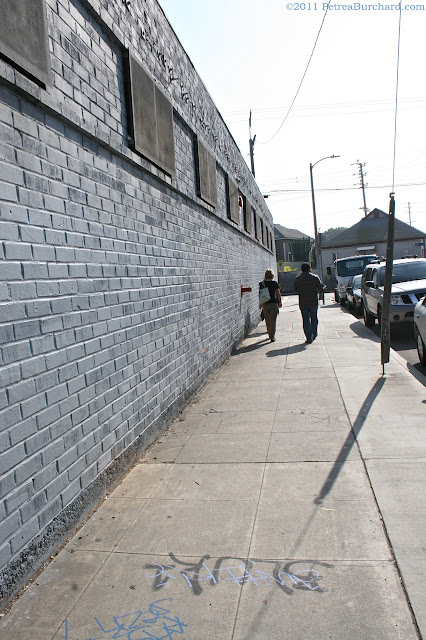 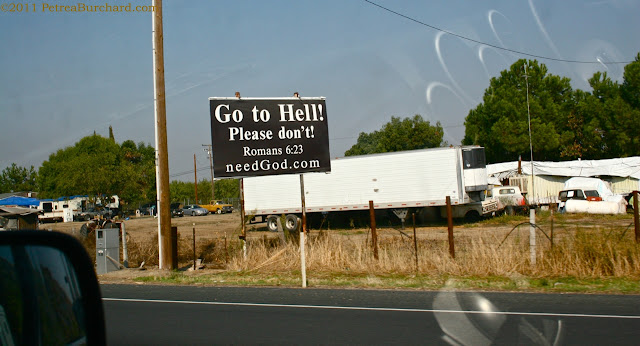 Zen Monday's the day you experience the photo and give us your thoughts rather than me telling you what I think the picture's about. There's no competition, no right or wrong. We're here to have fun.

I look for something worth contemplating or, failing that, something odd or silly. Or all of the above, if I'm lucky.
Posted by Petrea Burchard at 12:01 AM 29 comments: 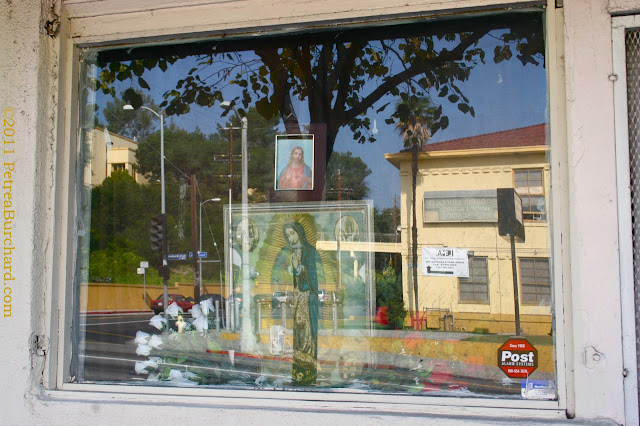 reflections in a store window across from Abraham Lincoln High School
I said I needed a vacation and I got one. Last week I toured Lincoln Heights with Manny Rodriguez, who's lived there since his family came here from Mexico when he was six years old. Manny knows the neighborhood almost as well as the neighborhood knows him.

Karin Bugge, the Altadena Hiker, had posted about her explorations of this historic Los Angeles area and Manny emailed her and offered to show her around. Bellis and I got to tag along.

Tomorrow here on the blog we'll celebrate Zen Monday as per usual. Then, for the rest of the week, I'll share my favorite Lincoln Heights photos. In the meantime, I think you'll enjoy Karin's post about Manny and our visit.
Posted by Petrea Burchard at 12:01 AM 25 comments: